Day One
All of us  involved in the Veterans Service Program- either working in partnership with Project Healing Waters or working independently - are constantly on the look-out for new waters. We try to take our vets out on the water at least once a month, and the opportunity to explore new venues that might provide the therapeutic healing that we are after is a treat. I know, it’s a tough job, but somebody has to do it. We can’t just turn our vets loose on untested waters! Such was the case this past week for Ryan Harman and I. Though we weren’t heading to the Rockies out west, the “Rockies” we were headed to take no backseat to their western cousins.

A little over a year ago I was contacted by a Sister from the The Community of the Transfiguration, a religious order, inquiring about our Veterans Service Program and asking if we might be interested in utilizing a stream that they controlled. Of course, she had my full attention. I heard no more about it until two weeks ago when I received a call from our friend Tom Fanslow, Land Protection Director.from the Carolina Mountain Land Conservancy, and we set a date to walk the property. Tom was the perfect guide for us as his group has worked with the Sisters to preserve the property and he was intimately familiar with the stream and its surrounding terrain. 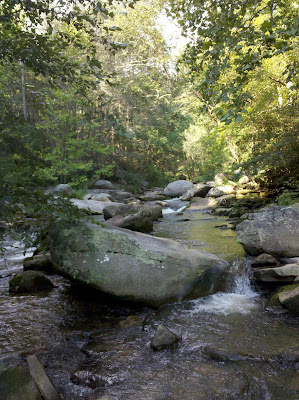 Turns out the stream is only a few miles away from our PHW program in Asheville, and while both Ryan and  I were familiar with the stream, neither of us had explored this particular stretch of it.  We met up with Tom and the properties care-takers and headed down to the Rocky Broad.  The stream runs through the little North Carolina towns of Bat Cave and Chimney Rock (famous for the filming of Last of the Mohicans), carving out a beautiful boulder strewn gorge as well known for its flooding potential as its trout fishing and film career.  The Sister’s property was upstream, running for a couple of miles up to the headwaters. 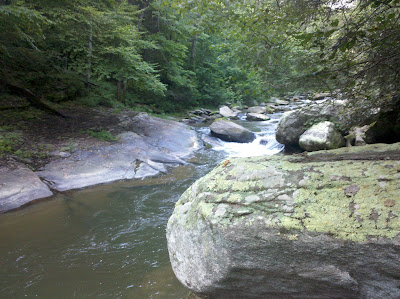 The caretakers have done a fine job of maintaining the property and though we had no fishing gear with us, and saw no trout, we did see it’s potential. (Ryan later talked to an old timer that had sampled these waters many years ago and we’re confident, based upon his recollections and our observations, that it will sustain a good population of trout if seeded properly.) Access for some of our veteran participants – the ones with limited mobility – will be a problem, but for those that can handle a bit of boulder hopping it will be an ideal location to get out and enjoy. We were assured that the stream’s upper reaches hold a pretty good population of native Southern Appalachian Brookies and on our next visit – with fly rods in hand – we intend to verify that claim.

Day Two
Then on Friday, Ryan and I grabbed our fishing gear and met up with Damon Hearne, TU’s Southeast Land Protection Coordinator, to travel up to the Tennessee border to check out what's known as the Rocky Broad property. Damon and TU members throughout the region have been very active in preserving this marvelous property and to quote from our TU website, “Rocky Fork, a 9,624 acre parcel named after the pristine trout stream that runs down its center, creates a vast, unfragmented haven with over 16 miles of stream, approximately 4 miles being classified as a hybridized population of Southern Appalachian Brook Trout. According to the U.S. Forest Service, the property is the largest unprotected high-elevation tract of land in the southern Appalachian Mountains.” 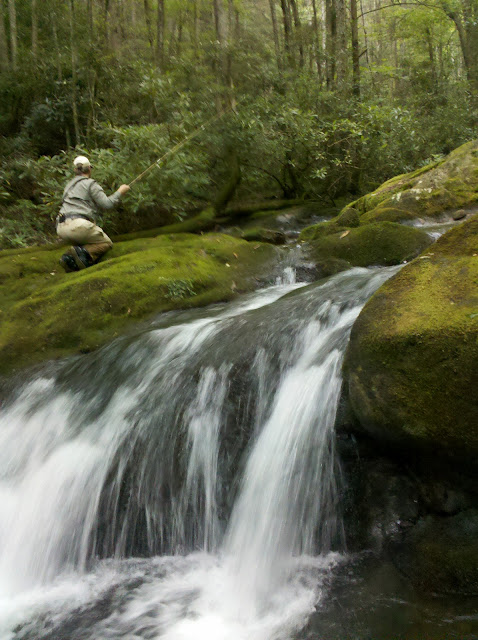 Well, Ryan and I have fished a lot of waters and we both agreed that neither had ever wet a line in a more beautiful location.  This place is incredible.  A recent episode of TU’s On The Rise program featured Damon guiding the host on the Rocky Fork, and the scenery they captured on film was impressive.  But that viewing and my weak efforts to capture it with my cell phone camera do not do it justice.  Yes, the place is amazing. 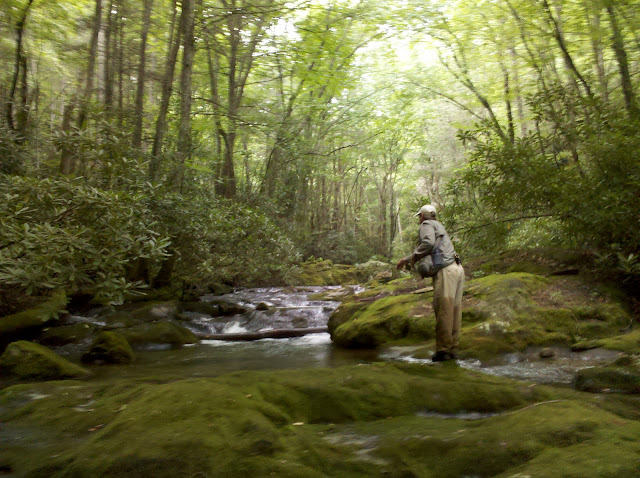 We caught numerous wild rainbows up to about 10 inches, and even though told that we were not high enough to expect the native brookies, Ryan did catch one little one.  If we can con Damon to take us further up the mountain – and if I can handle the hike – we may yet get into the thick of the natives.  In the meantime though, like the Rocky Fork, with a bit of a climb and a lot of rock-hopping, we’ll try to get a few vets up to sample this fantastic place.