They made me do it! Both of our daughters and their mates have gotten into camping – well, it’s sorta like camping. They each are proud owners of 30 plus foot travel trailers, campers, and for a few years now Shirley and I have been able to pull off a major coup. Just a short 14 miles from our home lies a beautiful little lake and campground that we discovered a few years back, and of all the camping sites available in Western North Carolina we’ve been able to convince the girls that this is the one spot that is worthy of our annual Memorial Day Rendezvous. There are a number of reasons why we are partial to the place. First and foremost, the fishing is good. The water is clear and the wooded shorelines are free of houses and boat docks; the separate spring fed swimming lake is great for the grandkids and the campsites are clean, bug free and well maintained.

But back to the fishing. I have fished for trout in some pretty special places. I have hiked in, jeeped in and driven up to the banks of some fantastic waters, but I have yet to discover a more enjoyable way of casting a fly line than while dangling my legs in the cool waters of Cascade Lake on a hot spring or summer day in my float tube. Cascade Lake is formed from the clear waters of Little River, which flows from the DuPont State Forest in WNC. The upper end of the lake below Hooker Falls has a decent population of rainbows and I’ve seen photos of some pretty nice largemouth that have been caught down lake. Most of the angles are after these. I aint. No sir, Chad and I go there for the bluegills. 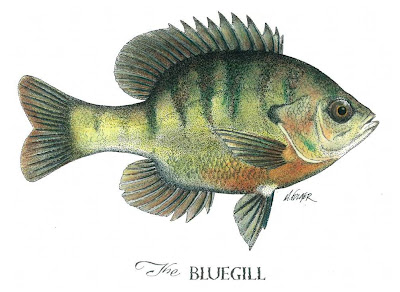 As we watch boat after boat heading out with their bass gear, Chad and I just chuckle as we land one ‘gill after another within shouting distance of the boat ramp. This year was no different. At midday on Friday I inflated the float tube, grabbed my 2 wt. and a selection of flies and headed for the water. That first immersion in the cool waters of the lake, no matter what the ambient temperature is, gets your attention. I eased into the craft and kicked my way to the far bank about 100 yards away. By the time I arrived, the mix of cold water and hot sun had reached the perfect comfort level.

I tied on a little yellow chenille bodied, rubber legged fly and by the 5th cast I had released three pretty fish back to the depths. The average size of these blue gills runs around seven inches, and occasionally we catch one of hand size – say around ten inches. Cast after cast, as I kicked my way down the shoreline the fish were very cooperative. Within two hours I had managed to catch around fifty of them. Great fun on a two weight.

Chad joined in on Saturday and the action continued, but at a little slower pace. Meanwhile back at camp, the kids were having a blast with the swimming and the science experiments that daughter Melanie had brought along. All four grandkids, donned in their chemistry lab smocks had great fun making fake snow, creating slime and who knows what else. It was to be a fun and educational weekend for all of them. By the end of the holiday I would come to regret the educational part of the deal. 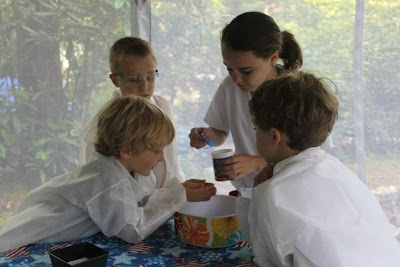 On Sunday afternoon it was decided that our daughters, the grandkids and our non fishing son-in-law Jonathan, would rent canoes and paddle up to Hooker Falls for a picnic. As they paddled past Chad and I along the shoreline they had what they thought was a great idea. They figured their science projects should evolve into a little biology lesson, and that we should keep four fish for them to clean and cook up for dinner that evening. Well that turned out to be a curse of sorts. From that moment on the bite was off. Cast after cast and no fish. Chad had drifted away from where I was working the shoreline and he wasn’t having any luck either.

I had tried just about all of the traditional bluegill flies and in an experimental mood I tied on a size 12 Humpy. A couple of casts later I saw a flash of color dart through my sunken fly and I was hard onto a decent fish. I had seen more bass on this trip than ever before and I hoped that I would get lucky and catch one of them, but so far, they had rejected my offerings. If this was a bass though, it sure acted strange. Instead of thrashing around on the surface with a jump or two thrown in, this fish headed straight for the deepest water in the lake. My 2 wt. was double for a good 4 minutes until he finally came into view. It was a bluegill…and a larger one than I had ever seen, much less caught. As I measured the big guy’s length, I hollered at Chad to come my way with his camera. 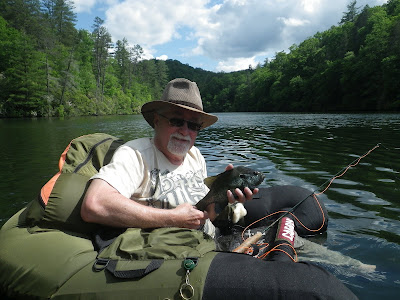 As Chad’s eyes grew bigger looking at my fish he says, “We gotta keep that one!” to which I replied, “No, we don’t even have a stringer.” But of course, as the flotilla of grandkids passed Chad on their way to the falls, they managed to find a piece of wire on the bottom of the canoe and passed it over to him with instructions to keep some fish for the kids. So here I sat in my float tube, holding in my hand a 13 inch bluegill that I, by way of Chad, had been ordered by my family to keep. I tried to recall the last time that I had kept any fish, much less a bona-fide lunker. It had to have been at least 45 years. As the day was growing short and the fishing had been slow, I relented and slipped the wire through the fish’s lips.

The fish cleaning exhibition later that night went reasonably well and the fish did indeed taste very good, but still I was tormented by my decision to keep him. I did a little research on the average growth rate of bluegills when I got home and learned that the fish was at least 10 years old . . . and certainly near the end of his reproductive life span, which made me feel a little better. He went out like the lunker he was though. I don’t think I’ve ever had that much fun from my end of a fly rod.

Over dinner there was serious talk about changing the rendezvous location for next year. Seems there is a great little island off the Carolina coast that has a lot to offer. Supposed to be great for crabbing. Wonder how deep a bend a crab will put into my 2 weight? 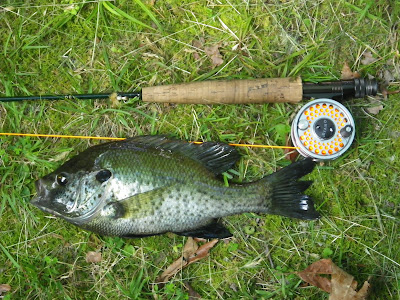 Posted by PATRIOT DREAMS at 9:56 PM No comments: