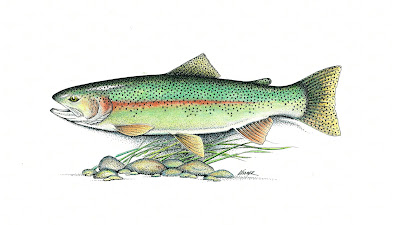 I REALLY LOVE RAINBOW TROUT!
After being weaned on Bluegills and Smallmouths my Dad introduced my brothers and I to the Rainbow. Dad grew up in SW Missouri, just a few miles from Roaring River State Park and he spent his early years casting a fly to the ancestors of the trout that we were introduced to.
Many of my earliest and fondest memories are of watching Dad expertly lure these gorgeous creatures (with a casting stroke that would rival the best of the FFF Master Casting Instructors), and the year that I was turned loose on them is etched in my memory. I don't recall the exact year...I must have been 10 or 11, but I'll never forget that summer of learning. We must have spent at least eight weekends camping there and I know that I spent from dawn to dusk slingin' flies at those trout. I believe my first rod - the one that I was using - was a white fiberglass Shakespeare model with an "automatic" reel, and I recall that I caught a lot more trees than trout. In fact, it was the last weekend of the summer before I managed to hook and land one of them. I remember the pool - it was the one below the bridge right in front of the lodge - and the fly was a red and yellow Woolly Worm. (Back then, in the Ozarks, they were Woolly Worms - not Woolly Buggars!) I'll never forget the feeling I had...and even if he were still with us, I could never thank Dad enough for that introduction.
Posted by PATRIOT DREAMS at 9:28 PM 2 comments: