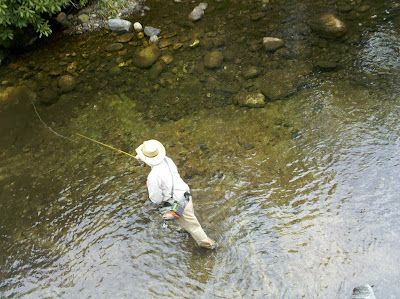 I’m standing on what Ryan called the “Million Dollar Bridge to Nowhere” but that’s not entirely true. This marvelous engineering feat (take my word for it, it’s an awesome bridge) leads to a trail to somewhere- the upper reaches of a little feeder stream of the Davidson River – and that’s Ryan fishing it.

On this day with record breaking temperatures, we decided to leave the demands of our bill paying jobs behind and head out for a little R&R. We hop-scotched from one little plunge pool to the next and managed to catch a few wild rainbows each and one gorgeous little brown. It was the kind of morning that I need to have more of. For the first time in who knows how long I spent the entire time fishing upstream with dries. Everyone that knows me knows of my aversion to this sort of fishing, but on this day, on this little creek, it was just what I needed.

Ryan has a rule when rock hopping up really skinny water: When one guy catches a trout, it’s the other guys turn and the other guy fishes until he catches one. Well, not too long into the morning I caught a wild rainbow of about three inches and figured that it didn’t count. Wrong Alan. Size matters on these little creeks and according to Ryan a fish of that size counts. In fact anything larger than a sardine counts. His turn. And so it went through the morning. 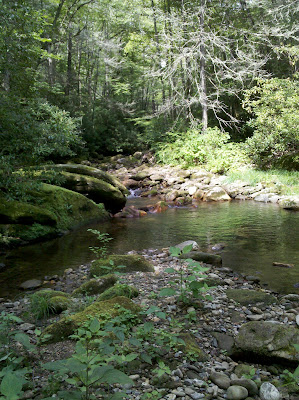 Around noon I suggested that we might try going downstream to the big water and sample some bigger prey, but after leaving the relative coolness of the creek environment and arriving at the “D” we found both the air temperature, and that of the water, to be just a little too warm for ethical fishing . For the sake of the many fish that we would surely have caught, and after I reminded myself of who I work for, we decided that our time would be better spent enjoying a pulled pork sandwich in the air-conditioned comfort of Hawg Wild Barbeque. And speaking of who I work for, I’d better get back to work.
Posted by PATRIOT DREAMS at 3:44 PM 1 comment: