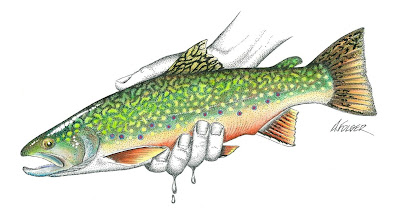 The Brookie that you see above was done in preparation for my showing at this year’s TROUTFEST which will take place over in Townsend, Tennessee on the weekend of May 16th and 17th.
Troutfest is a Fly Fishing Exposition and Fundraiser held in the Great Smoky Mountains. All profits earned from this event minus some seed money for next year’s event are donated to Great Smoky Mountains National Park Fisheries Department for brook trout restoration and other fisheries projects in the park. The Little River Chapter of Trout Unlimited sponsors this event as their major fundraiser and annual festival. This year the event will be one of the largest venues for fly anglers in the Southeast United States and it should be great fun!
www.troutfest.org
Posted by PATRIOT DREAMS at 9:47 PM 3 comments:

There's something in my eye

Earlier in the day one of the Project Healing Waters organizers set up a very high-tech speaker on the end of my display table. I was at the 2 Fly Event at Rose River Farm over the weekend. As I talked to the events participants that wandered by ...both pro-guides and the vets that were there... the speaker just set there silently.

Probably two hours later the music started. Suddenly there appeared a rather scruffy lookin' individual in a tattered cowboy hat. He moved close to the speaker, cocked an ear towards it and stood there listening. I could hear the music but really didn’t pay that much attention to it. I was more focused on the cowboy. He stood silently listening with an occasional nod of his head - in obvious agreement with what he was hearing. Although the cowboy clearly wasn’t, I’ve seen the same look from an inebriated cowboy or two in the bars I frequented in my youth. You’ve seen them too...in rapt attention to the jukebox as if the song were just for them.

Well the song ended and he walked away. I would see him again later. At the closing of the day, at the beginning of the awards ceremony, he was introduced. They said his name was Sam Tate and that he was going to sing a song or two for us. And sing he did. Since I quit listening to popular music about the time that some fool invented disco, I had never heard of the guy. Turns out that old Sam has a pretty good reputation among country music fans...Song Writer of the Year... and I heard later that he was listening to a recently recorded version of his song, The River Just Knows as he stood by my table.

So Sam sang his song and all of us that could stood and clapped. We all seemed to develop that eye irritation about the same time too.

You owe it to yourself to link to the music:
www.projecthealingwaters.org/html/videos/video.html
THE RIVER JUST KNOWS
4 a.m. comes awful early
And I was dead on my feet
But if you're gonna catch the biggest fish
You gotta lose a little sleep
I packed my gear and a couple beers
And I headed for my favorite spot
But I cursed my luck
When I saw his truck
Right where I pulled off
Was hopin' to have the river to myself that day

'Cause the river don't talk
You know the river don't care
Where you've been
What you've done
Or why it is you're standin' there
It just rolls on by
Whisperin' to your soul
It's gonna be alright
The river just knows
Just knows...
Posted by PATRIOT DREAMS at 3:27 PM No comments: