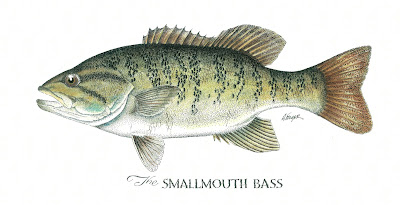 Although I live very near the banks of the French Broad River, known for its excellent smallmouth, musky ...and in its upper reaches, trout fishing...until Saturday I had not wet a line in the lower sections of this ancient river. I say ancient because it truly is. Only the Nile and another North Carolina river, the New, predate it.
The section near my home is narrow, fast, deep and filled with snags so wading it would be suicidal. It’s very near the famous Musky Mile and if I can ever con a buddy with a boat into testing it, I’ll find out if those toothy monsters are in residence there. In the meantime...

Saturday’s smallmouth adventure was exploratory. I drove up north of Asheville to the area known as The Ledges. The French Broad meanders through our foothills passing mile upon mile of fertile farm land, meaning that even the briefest shower can turn it to chocolate milk in a hurry. Knowing that we hadn’t had any rain lately, and knowing that the water was low and clear I figured that it was the perfect time to try out the smallmouth fishing.

I rigged my 5 weight with a bright yellow Clouser and stepped from the bank into surprisingly warm water that was very different from the more familiar Ozark smallmouth streams. The shoals, the mini-rapids and eddies reminded me a lot of the Flint River down in Georgia, but on a much larger scale.

I love the way a Clouser negotiates pocket water. Dipping and diving, darting and dashing from one current to the next...and to my good fortune, two smallies thought the same thing. Both were about a foot in length and in the fast water they put a good bend in the TFO.

As I’ve mentioned before, rock hoping and deep wading in fast water is best left to the young, so as I feared before arriving, my fishing options were quite limited. I watched a couple of agile spin fishermen further out in the river as they negotiated the shoals with ease, and if I was not alone I might have tried some of their less adventurous techniques. Probably not.

I spent more time walking the trails along the stream looking for better access than I did in actual fishing. If I can ever break the habit of wondering what’s around the next bend, and just stay where I am and FISH... I’ll probably catch a lot more. But old habits are hard to break, and besides, I just know that the next hole will be better.

Posted by PATRIOT DREAMS at 12:49 PM No comments: