In retrospect Larry B. was a pretty good fishing buddy. Well, make that an adequate fishing buddy. In fact, if Larry B. hadn’t been adequate and hadn’t owned a car he wouldn’t have been a fishing buddy at all. But having a car made him, for awhile, my best fishing buddy of all time. I had heard that there was fishing to be had beyond our little neighborhood –fishing that required a bit of travel, so “Hey Larry B…wanna go fishing?” 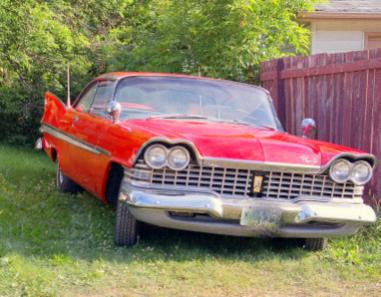 We called his car the Mayflower. It was red and had those huge fins that cars of its vintage were known for, and best of all it had that modern, hi-tech push button deal on the dash that you used to change gears. Very cool. And if cars had been equipped with cup holders back then, the Mayflower’s would have held a can of ether. No, we weren’t abducting cheerleaders...it was to start the car with. A squirt down the carburetor and off we would go. The Mayflower usually got us where we were going, but not without a little chemical assistance. The transport known as the Mayflower was a 59 Plymouth and we would have probably done better using it to chase cheerleaders than fish.

As I said, the Mayflower usually got us to where we were going. It was getting home that was troublesome. Take that day after school when we headed for the strip pits. East of town there was an old mining area and long before the idea of reclamation came along these strip pits had turned themselves, all by themselves, into an exotic fishing paradise. Of course, just about anything would have been exotic if compared to our other nearby fishin’ holes.

There are abandoned lead, zinc and coal mines scattered about northeastern Oklahoma, and the ones we were interested in, if seen from a satellite, would look like a miniature version of New York’s Finger Lake region; one long skinny lake after another, each about a quarter mile in length and separated by equally long piles of tailings grown over with years of vegetation. The “pits,” as we called them, were an irresistible temptation to a couple of sixteen year olds, and if the pits had minds to wonder, they would have wondered just exactly what two teenagers were doing there during the daylight hours. We followed the well worn tracks made by the Saturday night crowds (avoiding the empty Coors cans as best we could) into the bowels of the place, and through no fault of its own – this time - with a lurching stop the Mayflower parked itself squarely on top of a rise. Business as usual, but we weren’t about to let a problem that could be solved later interrupt the present, so we hurriedly retrieved our rods from the back seat and got on with it.

The “pits” were inhabited by exotic, funny colored blue gills and bass the size of – well, the size of – we didn’t know. We’d heard that there were monster bass in those waters, but to date, except for the occasional large rise-form, we’d yet to see one. One of the guys that I worked with at the Phillips 66 station when pumping gas on weekends, Dillard the tire changer, had caught them there by the bucket load . . . or so he said. Of course he said that he’d caught a five pound trout there too.

The water in the “pits” was clear as a bell, but then it would have been since there was so little run-off to color it. Each of those skinny strips of water were totally supported by the rain that came straight down on them, and perhaps by the waters that bubbled up from some underground cavities left from the mining days. Thinking back, it might have been that bubbling up action that tinged the water a nice light blue and contributed to the coloration of the blue gills. Might have been just as well that we never caught anything of eating size out of the place.

I was armed with my fly rod, and Larry B. had the old steel bait caster with the free spooling Pflueger reel that his old man allowed him to use. Casting poppers along the bank I was having a blast with the bluegills when Larry B. let out a whoop, screaming something about a big bass. The whoop had an entirely different tonal quality than the one he used for backlashes so I half believed him and headed up the bank to see for sure.

Sure enough, he had a bass on, and just as he was dragging it onto the bank the sky busted loose with the kind of storm that would make an Oklahoma plains storm chaser drool. Well, it scarred the crap out of us and we high tailed it for the Mayflower. Soaking wet, we were grateful to get out of the storm, and storm it did for the next two hours.

You’ll remember that the Mayflower was high centered, so all we could do was sit and stare at the storm and plan our eventual exit from the place. It rained and rained, and rained some more, and we figured that if the tide kept rising we could float her off just like her namesake might have done to escape a sand bar grounding. But it wasn’t to be. When the rain finally quit we were ankle deep when we stepped out of the car. It would have taken Noah’s flood to free the Mayflower from her perch.

We tried everything we could think of to get her back on all fours. We tried the time tested teeter-totter trick and she wouldn’t budge. We pushed her we every which way but loose. We thought of sloshing underneath through the water and mud to dig away the mound that had her suspended but realized that our digging tools consisted of two fishing rods. We finally had to admit that we were beaten and headed up the dirt road to civilization and some help.

Some thirty minutes later we came upon a phone booth and as luck would have it, I had the right change to place a call – but only enough for one call. By now our dads would be home from work so we spent a few minutes arguing over which one we’d hit up for help. My dad had warned me about the “pits” a thousand times with some quaint stories about teen age couples disappearing down sink holes, so I wasn’t about to call him, and Larry B. just trembled when I casually suggested that, after all, since it was his car, his old man needed to rescue us. He finally stopped shaking when I started looking through the tattered yellow pages for a wrecker company.

Then it dawned on our teen aged brain trust, that between the two of us we had only two bucks to spend on the tow truck, so that was out. Then it occurred to my half of the trust that Dillard would be getting off work about then, and that of all people, he could find us and he would probably keep his mouth shut concerning our little fiasco. I found the number to the station and rang him up. Sure enough, he was still there and he agreed to meet us at the car.

Dillard was a bit unusual. One day when the station’s hydraulic lift was broken down and he was helping with my wipe the windows, check the tires, check the oil, a dollar gas routine, he told me he dropped out of school on the day he figured out “cipherin’. He had no intention on that momentous day of his eighth grade year to use this skill to decode the Ruskies’ secret cold war communications – nope, Dillard was a bigger thinker than that. He figured that he could figure out, or cipher, just about everything, and such a skill was sure to propel him to riches - which he proved by landing the tire changer job at the Phillips station.

Dillard beat us back to the Mayflower and as we sloshed up to the car he was going on with a treatise on “how to remove a car from a pyramid of muck.” Dillard explained that the fulcrum created by the “pyramid of muck” was nothing but a device intended to spoil our weekend plans and protect the girls from our nefarious intentions, and that if we were to give him just five minutes he could cipher us out of the mess we were in. As he rambled on about levers and such, detailing his intricate car removal plan by scratching about in the mud with the butt section of my fly rod, Larry B. and I seriously considered borrowing a dime from Dillard, going back to the pay phone and calling our dads. As a tire changer he was superb, but as a practitioner of bovine excreta, Dillard had no equal. So, a half hour later, as he began cipherin’ on “Plan #7,” we decided that our best bet was just to have him drive us home.

“How was school son?” was the usual greeting I heard from mom when entering the house, but that was usually well before dinner, and certainly well before dark. On this particular evening dad met me at the door. With a raised eyebrow and a look down at my mud covered Levi’s, he just shook his head and said, “Your dinner’s on the table. Where’s your fly rod?”

Posted by PATRIOT DREAMS at 4:04 PM No comments: