Hey guys…I got an idea

How bout we build a giant enclosure out in the ocean. We’ll call it a park…a National Park. We’ll pick a beautiful spot. A place that tourists are sure to flock to. We’ll stock it with every species of ocean dwelling creature that we can find. Both the common ones and those that are endangered. Then we’ll invite the tourists. Families can swim the underwater trails that we’ll establish, take pictures, and have a great time taking in the beauty and the wildlife.

It will be a masterpiece. Everyone from Al Gore to The Sierra Club will praise our commitment to ecology and the environment. It will be a true show place of sea creatures large and small. We’ll have scientists monitor the various populations and if they see a fall-off in any given species, well, they’ll just have to up the protection levels or maybe bring in some critters from the outside.

Our park will be known far and wide as the showplace of deep blue sea. Of course there will be some sharks to contend with, but hey, they’re part of the environment too. Part of the food chain, you know, the eco-system depends on them. Of course there will be warnings signs posted from time to time if their population gets out of control, or if any of them get a little frisky, but just imagine the thrill that little Sally will have seeing a Great White up close and personal. Be careful though Sally. Don’t feed the sharks. Might even have to close the trails occasionally if things get out of hand.

Through our study of the parks environment we will learn our rightful place in the grand scheme of things. We’ll learn that even with our smarts we are no match for a Great White. Yes, there will be some deaths. But ya know, they were here first – we’re in their world - and they’re just doing what comes natural. If folks encounter these top predators in the park and they cause problems, the authorities will have to relocate them to another part of the park…over by the kelp farm perhaps. And if we wake up one day and find that we are loosing too many Sallys, we’ll have to put up more signs and maybe even close a few more underwater trails.

Who knows, the water park environment might be so conducive to reproduction that our top predators, to expand their range, may bust out from time to time. After all, we can’t really put a fence around the place, so the escapes will probably be pretty common. Sure, they’ll harass the folks outside our borders, eat a few surfers and such, but hey, that’s their domain too. The outsiders will just have to deal with it. Our goal is preservation and protection of the species. The aquatic species, that is.

This is ridiculous of course, but so is our current attitude towards another top predator. The grizzly bear. I just read that another death has occurred in Yellowstone. The second one this year, and I read not one word about the need to get rid of them. Yes, they were there first, and yes, we are intruding upon their space, but who’s to say whose space it really is? Last I heard we were in charge here. See Genesis 1:28. It continually amazes me that we, the true top predators, will allow a creature that can kill and eat us to share our hiking trails and fishin’ holes. Taken to its logical conclusion and given enough protection, these creatures, by “doing what comes naturally,” will run the place. 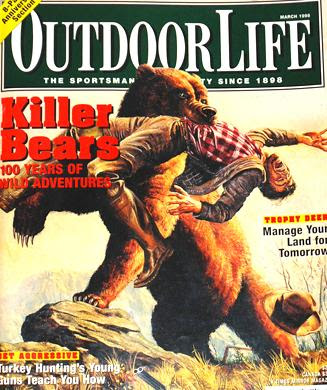 Or take a look at south Florida, where folks move into waterfront condominiums and run the risk of loosing their children to alligators. What do they do when one of these gators has the neighbor’s Pomeranian over for lunch? They relocate the gator. Give me a break. Kill the damned things, will ya!

Imagine yourself a city dweller. You’ve saved and saved for years and you finally have the dough to buy that little slice of heaven out in the country. You move in and find that the place is swarming with fiddle back spiders and rattle snakes. What do you do? You kill them, of course. Even though they were there first, they are a risk to your health and safety, so you do what any right thinking person would do. What’s the difference between spiders and snakes and the griz? Or the alligator, or the Nile crocodile…or that marauding tiger in India?

So we have a problem. Do we annihilate this most incredibly beautiful large killing machine called the grizzly, or do we live with it? There are just over 600 of these magnificent animals prowling through Yellowstone National Park and due to a number of factors our encounters with them are becoming more common and more dangerous. Their traditional food sources are dwindling. White bark pine trees are dying off, leaving the bears with a diminishing supply of pine nuts; cutthroat trout are at risk from global warming and army cutworm moths are at risk too. And there are few things angrier than a hungry bear coming out of hibernation and not finding the usual number of winter killed elk and bison to replenish his protein requirements.

What’s a hungry bear to do? More importantly, what are we to do?
Just wondering…
Posted by PATRIOT DREAMS at 5:56 PM