Ryan said the van ride back to the VRQ was animated. He said that the guys that hadn’t nodded off were still going non-stop about the fish they caught when they pulled to a stop at their temporary home...the ones that got a way and the obligatory “mine was bigger than yours” arguments. A very good result indeed.

So what is a VRQ, who were these guys, and a good result of what, you ask. Well, for new readers of this little blog the acronym VRQ stands for the Veterans Restoration Quarters in Asheville, North Carolina and the guys in the van were 13 residents returning from their first fishing outing on some pretty special private water. The evening before they had received their diplomas for completing the inaugural presentation of Adaptive Fly Fishing 101, a six week program on the basics of fly fishing that Ryan and I put together especially for them. Of course we figured if the program was successful we could introduce it to all of our TU chapters and Project Healing Waters programs across the nation. 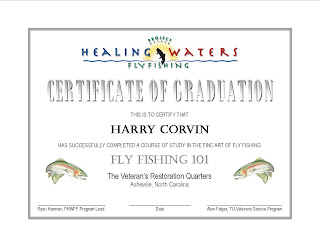 This all started two months earlier when I ran into my friend Jeff Miller of Honor Air fame while shopping at the neighborhood Lowe’s, and what started as a friendly “How you been?” encounter turned into an excited and extended conversation. Jeff was the driving force behind the Honor Air flights that have taken hundreds of area WWII veterans to Washington to view the WWII memorial in recent years and I expected to hear the latest news about the last flight but instead I heard about the VRQ. Jeff couldn’t stop talking and I wouldn’t let him.

Jeff explained that three years ago the Asheville/Buncombe County Christian Ministries purchased a Super 8 Motel just down the road from the Asheville VA Medical Center to house the areas homeless veterans. The facility houses 230 residents in a two year program to serve the special needs of homeless veterans, including the disabled. They provide intensive training, life skills and specialized employment services for veterans, and in the past three years no one has ever been discharged to the streets. Every veteran graduates to appropriate housing with income. They receive full access to medical care, dental care, pharmacy and medication assistance as needed, and now, thanks to Trout Unlimited members and Project Healing Waters they are learning the art of fly fishing. The six week program covers everything from casting to fly tying, the gear we use, the various trout varieties and their habits, to basic entomology, water reading and cold water conservation…and it has been a huge success. 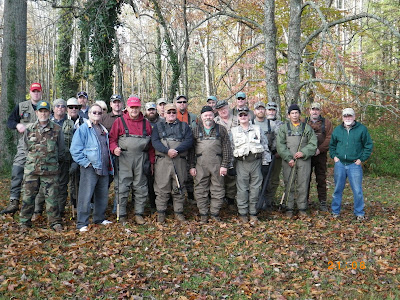 On Sunday morning volunteers from the Pisgah chapter of Trout Unlimited were joined by other well known guides from the area, many with PHW experience. Leading the guide duties were Jesse Connor of bamboo rod building fame (Trout Dancer Rod Company) and local legend Joe Moore from my TU chapter. Along with other TU member volunteers, they made for a great one-to-one ratio of guides to veterans. We met at Davidson River Outfitter’s shop in Pisgah Forest, NC where proprietor Kevin Howell had once again set aside his entire trophy water section for the day’s outing. After a quick sausage biscuit breakfast the vets began the unfamiliar task of gearing up. The early morning temperature was a bit frosty and their bulky coats and jackets didn’t help matters any as they squeezed into the waders and boots generously provided by Kevin and other area fly shops. One of the vets, Harry, had a complaint right off the bat. “Why are these wading boots wet already?” he said as he laced the recently used loaners up over his socks. Ryan and I knew that a lot of modification was going to be needed before formally publishing Adaptive Fly Fishing 101 for distribution, but we figured that most students would know that the waders go on first! Guess not. Harry would later redeem himself in fine fashion. 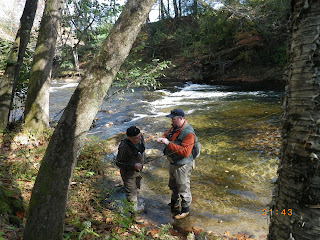 As the temperatures warmed up so did the fishing and the fishing was fabulous, with every vet landing his share of the Davidson’s beautiful and large rainbows and browns. With brand new TFO 5 weights that they received with their diplomas the night before, they put their recently learned skills to good use, with many of the trout caught measuring well over twenty inches. And not to slight the other guys from the VRQ who shared the water on that crisp October day, but “put the waders on first” Harry out-fished them all. This Pennsylvania native, who had never fished for trout before, landed four of the prettiest rainbows that any of the guides had ever seen. Were Harry and his buddies spoiled rotten to catch such fish on their very first outing? Absolutely, and the members of Trout Unlimited that volunteered for this groundbreaking Project Healing Waters program wouldn’t have had it any other way. 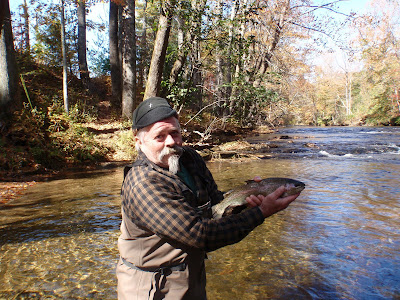