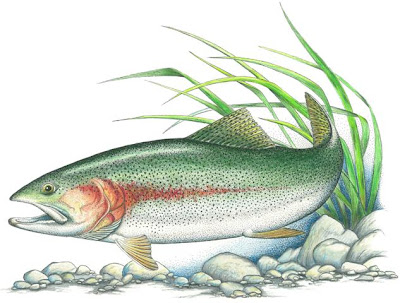 My latest illustration, done for the upcoming FFF Southeastern Regional Conclave to be held at beautiful Unicoi State Park on June 4th and 5th.
The show promises to be bigger and better than ever, with seminars, vendors, a great auction and of course the opportunity to sample the fabulous fishing in the north Georgia mountains. Hope to see you there...stop by my booth and sign up for the free Catch & Release art drawing !

Posted by PATRIOT DREAMS at 10:03 AM No comments:

In a little over a month the drawing will take place!  Someone will win free Catch & Release art ($350 value) on the 28th of June.  Send me an email (www.clearwatermemories@gmail.com) of your favorite grip & grin moment and you'll be in the running.  No Play...no WIN!
Posted by PATRIOT DREAMS at 8:07 PM No comments:

I like those streams that meander through the countryside with a road firmly affixed to their hips. Not so much because I’m lazy and always looking for the easy way...well yes I am lazy, but more importantly, I’m scared to death of snakes. In spite of my general laziness however, I will hike hundreds of yards down the road to get to an easy and brush free access point. One that doesn’t require climbing over dead-falls and wondering how big the local snakes are.

Yes, I’m scared of snakes. So scarred, that if they ever make a pair of snake proof waders I’ll have a pair and I’ll catch a lot more fish. I’ll wear ‘em in the heat of summer no matter how heavy and un-breathable they might be, and I’ll fish in places I’ve avoided for years. I’ll do just about anything to avoid snakes.

Reminds me of a day on Flint Creek. Near the Arkansas line in eastern Oklahoma, this stretch of water was full of Kentucky’s (aka Spotted Bass, micropterus punctulatus), and long before the gated community plague set in we spent many weekends camped there, wet wading and fishing for the streams plentiful inhabitants.

Flint Creek was a lazy foothills stream with deep long pools separated by shallow rapids. At what we called the “Ledge Pool” there were no roads paralleling the creek and no trails either, so if you wanted to get to the next hole there were only two choices: Stomp through the chest high bushes or wade.

Casting a tiny Lazy Ike through the length of the pool I had caught a few bass and decided that it was time to move on downstream. The pool’s outlet funneled to an unusually narrow width and was curtained completely with wispy willow branches that hung down to the water’s surface. Compared to the alternative of leaving the water for what had to be the home of a thousand copperheads ...it was a no brainer. I’d wade through it.

As the stream narrowed and picked up velocity it got deeper with each step. So deep, that by the time I got to the willows I was neck deep and barely ably to keep my footing as I made my way downstream.

With my rod pointed behind me to avoid getting tangled in the tree I reached out with the other hand to spread the willows from my face. My neck deep venture into “willow land” went just fine for a few steps. Then it got ugly fast.

You’ve heard of it raining cats and dogs...even heard of it raining fish, but have you ever heard of raining snakes? Yes, in the midst of that giant willow tree I had disturbed a nest of vipers. As they dropped like a storm of long, slinky raindrops, at least two dozen of them were suddenly in the water with me...eyeball to slitted eyeball. I ducked under water, raised my feet and let the current carry me into the next pool.

Just a few of my tormentors followed me downstream, and sure enough they were snakes; they were green, about six inches long, and of course they were totally harmless.

Instead, by choosing the route through the willows, the scarring only lasted a decade or two.
Posted by PATRIOT DREAMS at 11:20 AM 1 comment: 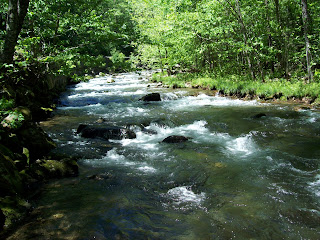 Ever since getting involved in Project Healing Waters I have had the great pleasure to experience some of the finest fly fishing in the southeast.  In fact, a little over a year ago I posted a recollection entitled “Who Needs Montana?” referring to the quality of fishing that can be had within a short drive of my home in western North Carolina...and I meant it!  The fishing in this part of our great land is fantastic.
So fantastic that it has me spoiled.  As I’ve mentioned before, when we take out the Wounded Warriors we want to get them onto fish, and preferably big fish.  Many of our local fly shops have graciously given us time on their private waters, and without exception we have caught fish.  Big fish.  Like I said, I’m spoiled.  I’ve been hung up on catching big stupid fish.  Shame on me.
Sunday was the cure.  My friend Jimmy Harris from Unicoi Outfitters and I were scheduled to meet up in the Smokies for a day of fishing, and when I suggested that we head for the Trophy Waters Jimmy had another idea.  Rather than test the strength of our equipment on the local bruisers he suggested that we try something a little more soothing and serene.  Jimmy wanted to try the Oconaluftee up in the park.
Fifteen or so years ago, right after moving to North Carolina, Shirley and I camped at Smokemont in the park and I tried my luck on this little stream, but being totally unfamiliar with the area I didn’t fare very well.  My Ozarkian tricks didn’t cut it with these locals, and I haven’t been back.  Shame on me again.
Jimmy and I met at Rivers Edge Outfitters on Sunday morning and headed up into the park.  On this Mother’s Day weekend we found a gorgeous North Carolina day with temperatures in the seventies and surprisingly, we had the river to ourselves.  Through the day we met a couple of other anglers in the parking area, but on the stream it was just Jimmy and I.  We leapfrogged up and down the stream catching mostly native rainbows. Back at the shop, owner Joe Street had warned us that there was a good amount of fly activity on the stream so we stocked up on his favorite dries, hoping to have a bit of top water action.  But try as we might, the ticket was down and deep.
It was a “back to the basics” type of day, and it was just what the doctor ordered to correct my “big fish, easy catchin” condition.  Stealth...reading the water...fly selection...depth determination...casting accuracy...all the things that go into making a memorable day.  All the things we learned in days of old.  And all the things that I have been missing.  The largest fish would have been lucky to go twelve inches, but man, were they beautiful. The stream was crystal clear, the spring flowers were in full bloom and the companionship could not have been better. 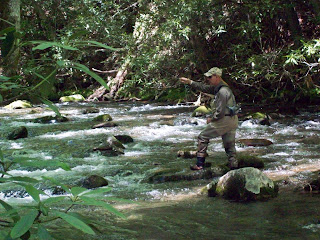 Just downstream from the Smokemont Campground I eased my weary butt down on a fallen log with the pretense of changing flies.  Huge boulders surrounded this bend in the river and the log was positioned with others on an immense slab of rock reaching to the water's edge.  As I sat I imagined this place before the white man came and turned it into a tourist destination.  I imagined a campfire and an Indian brave setting on the same slab.  There might have been a few kids playing in the water, and perhaps their mother cooking a few brookies over the open fire.  Had I been here many years earlier I might have found an arrowhead or two, or maybe just a pottery shard.  I looked around and all I found was myself.  God was good to me on Sunday. 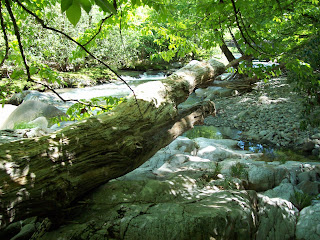 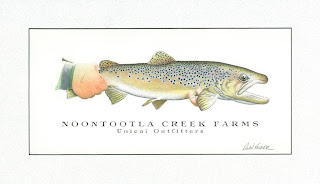 Well folks, it’s been a year (a little over actually – been too busy to notice!) since I started this blog adventure. It sure has been fun and educational, and through the blog (http://www.52trout.blogspot.com/) I have met a lot of great folks. By putting myself on a sort of “schedule” I have done more work than normal and most importantly, I believe my work has shown improvement. I can’t wait to see what next year brings!
Sooooo...To celebrate the one year anniversary of my blog I am going to give away an original replica art piece featuring that “worthy of mounting” trout that you caught either yesterday or way back when.

That’s right...FREE. I’ll create a beautiful color rendering of your grip and grin moment that will include the trout with your name, the date and location – all hand lettered below the image.

I’ll create your instant heirloom on 11x14 archival paper, and it will be shipped to you free of charge and ready for framing.

So, here’s the deal. Sometime in the next 52 days send me an email (clearwatermemories@gmail.com) with a good photo of that monster. I’ll put your name in the hat and on the 28th day of June the lovely Shirley will draw the winning name.

My thanks to all of you for joining me on this journey!

To see a few example of my Catch & Release art go to:
http://www.clearwatermemories.com/replicas_and_sculptings.html
Posted by PATRIOT DREAMS at 12:58 PM No comments: