You CAN go home again... 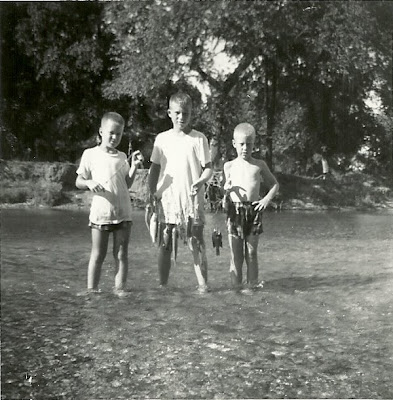 Me, that Hayes kid and Bruce

I stepped into the cold clear water of Upper Spavinaw Creek and stepped back in time. I waded up stream past the confluence with Beatty Creek and cast my fly toward the eastern bank, standing in the current with as much hope and anticipation as I did over fifty years ago.

Of course that Hayes kid wasn’t there, nor was his sister - the pretty girl on the rock. I hadn’t seen them in fifty-two years either. My brothers were there though, which made it all the more special. This place is magic. The memories…ah, the memories.
It’s where my affair with clear water began on a two week camping trip that I wrote about here in July of ’09, and it’s pictured on the home page of my website, www.clearwatermemories.com.

The minute we arrived I exited the car and walked across that blazing white gravel to put my foot once again into the stream of my youth. It was just as cold and pure as I remembered it, and as I looked upstream I found that fifty plus Oklahoma spring floods had not done much to alter its course.

Casting my two weight against the bank under the trees that used to hold the brownies, I was excited to see the small bluegills and a few smallish bass follow the swing of my fly. In hopes of fooling them into thinking that catfish minnows (mad toms) were on the menu, I had tied on a black cone head woolly, only to wish that its marabou tail had a hook hidden inside. They attacked the tail with gusto…I set the hook with gusto…and nothing came to hand. I clipped the tail off and they ignored it. 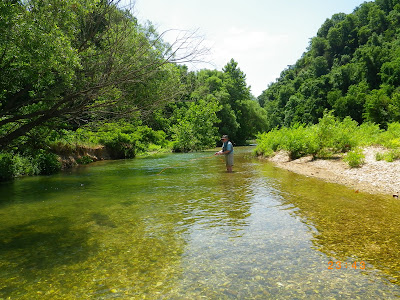 When I switched to a yellow attractor pattern I started catching the bream, but the bass – as wily as always – laid back and let there smaller cousins have all the fun. I eventually caught a few, but they weren’t the familiar brownies – they were black bass. Brother Bruce, who has fished the stream often in the years since our first great adventure, told me that just a few years back the hog and chicken pollution from upstream had gotten so bad that the creek was nearly un-fishable. The moss and weeds in the creek had clogged the stream and nearly every cast meant spending a few minutes after every cast cleaning your fly of debris.

I’m no fisheries biologist but I suspect that the degraded water quality did the brownies in, and that the black bass, known for their ability to survive just about anywhere, had taken over. In recent years, with tougher environmental controls, the creek had returned to its former state, but without the brownies. And that’s a shame, as this creek looks more like a tumbling trout stream than a backwater haven for largemouth bass. The fast runs that were formally occupied by the swift water loving brownies now held nothing at all.

Still, I had a great time. It was a marvelous afternoon. Brothers Bruce and Tom took turns slinging my little TFO catching blue gills and bass, and I managed to catch the prettiest fish I have ever caught. With apologies to all lovers of trout – feast your eyes on the image below and tell me that God didn’t create it. Tell me that it just evolved from the ooze and that its beauty is just an accident of nature. Sorry folks. God made it and he put it there for my amazement and enjoyment. 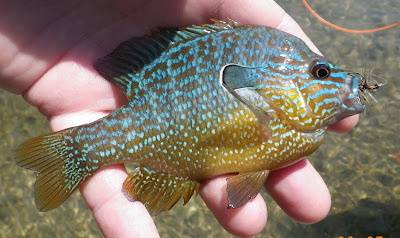