Bunnies and Goats and Bears, Oh My! 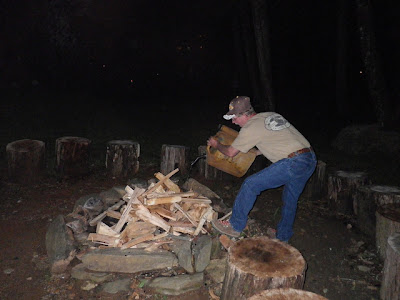 As the hired hand poured a full can of diesel fuel onto the stack of wood inside the fire ring he started talking about the bears. Said they came down about every night to rummage through the trash. Said there were a number of dens up the mountain and a year or two ago one of their den mates came to work for him. Strange fellow he was. Said he worked out OK but smelled pretty bad. We were at a campground that will remain nameless lest I be served with a summons at some future date and accused of slandering the joint. Of course I’ll have a good number of witnesses to testify to the truth of my claims…so no worries.

This unnamed place was proud or its conservation reputation. Their brochure was loaded with platitudes about their back to nature philosophy and their love for the land. Their organic garden, their single Holstein cow, which if you timed your visit just right could be milked by all the campers, along with their bunny rabbits and goats testified to their commitment to eco-living. As further proof, the aforementioned bear dining hall was perfectly situated to serve the gastronomic needs of the bears. Their open topped trash enclosure backed up to the slope where the dens were, making for an easy dumpster diving entry. And as proof, the path up the slope was littered with the evidence. Yessir, the proprietors of this place had a true love for the animals. No bear would go hungry.

Memorial Day and family camping have become a tradition around here and this year we were in the deepest woods of the north Georgia mountains. Chad had found the place on the web - a “retreat center” with full hookups, animal petting, a trout stream you couldn’t fish in and a trout pond where you could. We set up our tent between our two daughters’ campers and wondered aloud why anyone in their right mind would call this wall to wall RV experience camping. Oh well.

Chad and I were a little familiar with the surrounding waters and had planned to spend a good amount of time away from the RV parking lot, and the “good amount of time” began on Saturday morning. We motored on down to the quaint Bavarian village of Helen, GA and stopped in to see our buddies at Unicoi Outfitters to get the latest fishing reports. The upper Chattahoochee was the recommendation, but getting there was going to take a little longer than normal. The tornado that came through on Thursday afternoon - the one we heard about on the Weather Channel that delayed our leaving home by a day - had downed a good number of trees on the forest service road that we would normally have taken, so we had to go the long way.

Five miles of bone jarring switchbacks led us to the headwaters of the Chattahoochee River. Little more than a small creek, 150 miles as the crow flies, and who knows how many tributaries later, this pristine trout stream would turn into a large and wide bass stream at Chad’s home near Columbus, Georgia.

The fishing was a little different than the available fishing back at the campground. Check out this warning sign that they had posted at the trout pond – a message that is sure to change the catch and release methodology of all my brethren. So releasing fish kills them? In fairness it probably does…if you hook ‘em deep with a night crawler. Six bucks a pound, if you please. 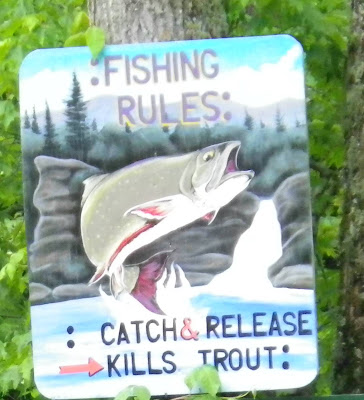 Chad and I managed to catch a good number of trout – all about a foot in length, except for one wild and beautifully colored rainbow - and the best fly color was yellow.

I know - surprise, surprise. Hey if it works for ya…why change? I stuck with a yellow hackled woolly with a black chenille body and black marabou tail, and Chad’s fly of choice was about the same. We probably spent a little over three hours on the stream and the ride back to camp had us wishing for those NASCAR type carbon fiber seats and HANS Devices to protect us from the whiplash treatment of the well rutted road.

The next morning Chad and my daughter’s fiancé Jonathan convinced me that these old knees of mine could climb the mountain behind camp. They theorized that if we hiked far enough up the mountain we were sure to find a few native brookies. I wasn’t about to wimp out, although midway up that first leg I threatened to. Glad I didn’t.

Near the top we came across the remains of what might have been a waterwheel. Nothing was left but the concrete supports, and looking at the log reinforced channel above it I was certain that we had happened across what at one time had been some sort of water powered mill. That is, until we saw this sign. 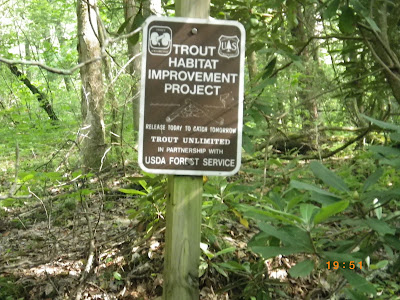 The intricately placed bank retainers – so far up the mountain and laid with such obvious care and planning – showed that some dedicated real conservationists had done some very back breaking work to ensure that our beloved brookies had a place to thrive. Thank you TU. 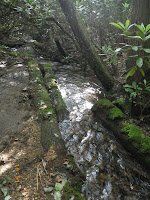 After we saw the sign and determined that we just might be in the presence of royalty, Chad proceeded to land the beauty shown below. Unfortunately that was the only one landed but to be in their presence; to walk the unspoiled forests and practice our Joe Humphries bow and arrow casts…we were in brookie heaven. 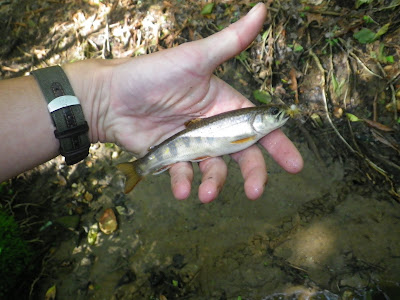 Around sundown, back at the campground, the old lady that owned the place was on the warpath. Traveling through the campground on her golf cart she interrogated everyone about their numbers – kids, guests, dogs, tents, and vehicles – all under the guise of striking up a friendly conversation. Through her accusatory interrogations she managed to collect an extra few bucks from everyone and if you questioned her arithmetic or her logic her standard response was, “You just don’t understand, we are conservationists.” There were charges for everything, including the grass seed she would have to lay down after our tent was removed. No wonder her campground was the only one in the area with vacancies. She’ll have a few more next year.

On Sunday everyone but Shirley and I took off on another hike up the mountain. Deciding to take a shortcut, they left the main trail and headed through the brush. After passing many caves and wondering about the bear population, they had a great time playing at the foot of a number of beautiful waterfalls. 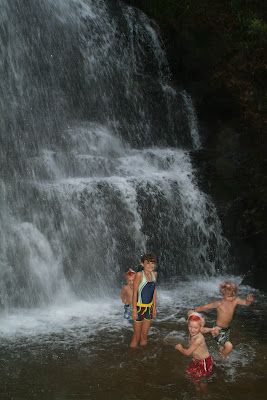 Eventually they came to the intended trail but they were going in an unintended direction. As they descended back towards civilization they came across some crime scene tape and posted to a tree on the downhill side of the trail was a sign reading:

Caution
There is fresh bear sign
all along this trail. Be aware
of your surroundings and make
noise, talking etc. if you choose to hike. 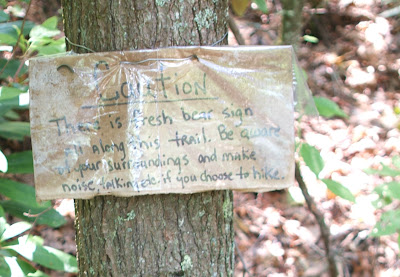 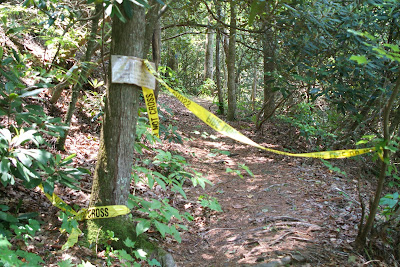 All in all it was a great holiday weekend. We fished some incredible waters, we ate some great meals, we enjoyed each others company; we survived the harassment of our hosts and we managed to avoid the tornados and the bears. Will we go back? Not to the place that I promised not to mention, but to the area? Absolutely. 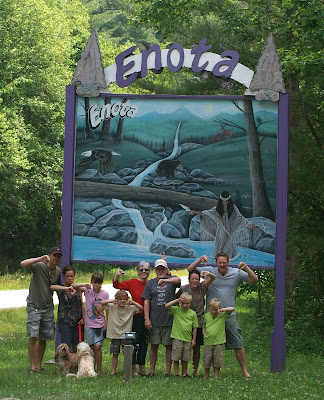