Okay.  No more late nights!  Finally finished the pen & ink of the Carp, the Channel Cat and now . . . the Musky.  Now comes the color as I try to bring these cold illustrations to life. 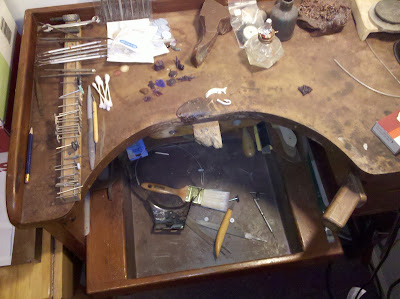 Hidden away in the deep recesses of our humble abode is a room . . . a room where my past is coming to life.  A tiny room that contains this bench and not much else.  I bought this jeweler's bench back in 1972 when I was beginning my apprenticeship as a goldsmith.  It served me well for many years as I sat at it whittling out custom jewelry and creating my own line of fine gold trinkets.

If you look close you'll see a few tools of the trade.  The wax, from which everything comes; the tools for shaping that wax; the "eyes" that make it possible for actually seeing the wax, and if you look really close you'll see a few of the recent wax models that I've created and a couple of sterling silver castings waiting to be finished.
Posted by PATRIOT DREAMS at 6:25 PM No comments:

Here is another illustration to go along with the Channel Cat in my last post...another image that once colored, will go to Riverlink for their signage plans along the French Broad River.

I have not succumbed to the current rage of catching these guys on a fly rod, but in my misspent youth I confess to impaling a few with arrows.  After all, to my mind these guys were just muddying the waters of my favorite bass coves.  What did I know!

Anyway, according to McClane's Standard Fishing Encyclopedia, this Old-World minnow was first successfully introduced into this country in 1876 from Germany.  Indigenous to Asia, carp were so abundant on the European continent that that they were mentioned by Aristotle as early as 350 BC.

Wonder what old Ari would think of landing one on a modern fly rod...
Posted by PATRIOT DREAMS at 8:43 PM 3 comments:

Of course it’s a Channel Catfish – at least, I hope you can tell that it is.
I was asked by Riverlink, a non-profit here in the Asheville area, to provide them with some fish images to be used on a number of interpretive signs they’ll be placing along the French Broad River.  They asked for a Bluegill, a Smallmouth, a Largemouth, a Carp, a Musky, and a Channel Catfish.  I jumped at the chance to do this as it will help highlight the fishing opportunities on our local big river and it gives me a good excuse to do the art for the Carp, Musky and Catfish – three species that I haven’t had  reason to do until now.

Riverlink, in their words, “is a regional non-profit spearheading the economic and environmental revitalization of the French Broad River and its tributaries as a place to live, work and play.”  A worthy cause , for sure.


This pen and ink needs some color and I’ll be adding that as time allows.  Stay tuned!
Posted by PATRIOT DREAMS at 10:45 AM 2 comments:

I just put the finishing touches on my neighbor's C&R piece.  Chas is still escorting his clients around Yellowstone, teaching them the finer points of photography - so he hasn't seen it yet.

I know that I've said it before, but I really do love doing these.  I got to spend a lot more time with this fine speciman of a fish than Chas did, so I got to know it pretty well.  Living vicariously through the exploits of others is some kinda fun!
Posted by PATRIOT DREAMS at 2:21 PM 1 comment: