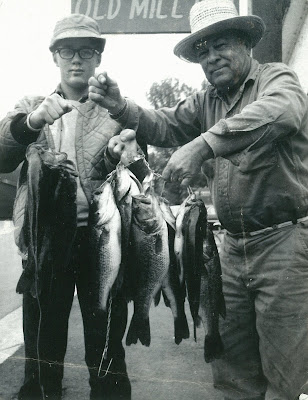 Uncle George and the Designated Driver
I was a year late in getting my drivers license and that may have worked to my advantage. You know, I was far more mature than the average 16 year old. At 17, as anyone that knew me would testify, I was fully capable of driving a car full of aging anglers across two states to their favorite fishin' hole. Right. But that was my job. As the only young, driving age relative of the aforementioned group I was selected. Uncle George and his cronies had made a yearly pilgrimage in the month of June, to Wilmar, Minnesota to a cabin between Green and Nest Lakes...a place known as Ye Old Mill Inn.

We arrived the day before bass season was to open. There was a guy named Bowen, a doctor named Secrist, a business man named Coast, Uncle George and myself. We had the entire month to fish the area lakes. On the drive up I heard all the stories. Green Lake for Smallies, Nest Lake for Largemouth and more lakes for Walleye than I can remember. Their stories...spiced with a nip or two of Canadian Club...had set the stage for what was sure to be a memorable trip. A memorable trip as long as I didn’t remember everything. (It was suggested that one in my position would benefit by a selective memory when relating the details of our trip to specific family members.)

Day one was a toss-up. Which lake to try? Uncle George and I headed out on Nest to give the bigmouths a try and the rest motored out across Green Lake. Green, as seen on the map, was nearly a perfect circle. Much larger than most of the lakes in the area, in addition to being a fine smallmouth fishery it was known by the locals as a great spot for ice surfing. Two guys, decked out in ice skates and holding a sheet between them, would catch the wind and fly across its frozen surface. It sounded like great fun but the thought of Minnesota winters and howling winds had no pull on me.

To be just a waterfall away from Green Lake, Nest was it’s complete opposite. While Green was wide open, gravel bottomed Smallmouth country, Nest was ideal Largemouth habitat. Multiple coves, lily pads and tons of structure. It was truly a top-water paradise. Although I had brought my trusty Garcia Mitchell 250, Uncle George presented me with an Ambassador 5000 bait casting rig and told me it was time I learned to use it. My first experience with bait casting went pretty well, and I soon had the hang of it...gently thumbing the spool, for the most part I was backlash free. Casting Creek Chub Darters, Skip Jacks and Hula Poppers, we landed bass after bass. These were not Florida Largemouths. In these cold waters, with their relatively short growing seasons, a six pounder was huge. They averaged probably 3-4 pounds. We sampled a number of coves and as long as we could keep the dogfish off our lines, we found the bass to be willing in all of them. The guys out on Green had no luck at all.

For the next two weeks I guided, in turn, each of the others around Nest Lake. Occasional days, or at least mornings, were spent on a few of the other lakes trying out the walleye fishing...mostly to no avail. Nest Lake was where the action was. One evening about sundown Uncle George summoned me to the boat for a trip up to the headwaters of Nest. He produced two small wooden and wire mesh boxes...each with a slit inner tube top and said we were going frog hunting. With him in the bow and me at the motor we set out. Now, Nest Lake was not over-run with boaters...particularly at this late hour, so I set the throttle to the max and pointed the boat to the west. About five minute into the run I saw two frantically waving arms above Uncle George's head. Note to Alan: Never, never, never drive a boat in a perfectly straight line. We missed the guy by inches.

Arriving at the headwaters, I beached the boat and with frog boxes in hand we headed into the thick weeds bordering the water. The place was alive with leopard frogs! We filled each box to the top and headed back to the cabin...zig zagging all the way.

If you ever have the chance to fish for Largemeouth in lily pads and you can get your hands on some live Leopard frogs...DO IT! I have never had so much fun fishing. Going weedless, we'd run the hook up through their lower and upper lips and aim for the lily pads. The frogs had been told by their mommas that there were creatures in the lake that would eat them, so they had no intention of leaving the safety of the pad. The frogs were well schooled, but we had other ideas. The battle for safety was the prelude to the REALLY fun part. We'd pull them off the pads and they'd scurry back on. As you can imagine, this caused a little commotion that was not unnoticed by the bass. You'd see the pads rippling as the bass converged from all directions, and if they didn't happen to arrive while the frog was in the water they'd blast up through the pad knocking the poor critter skyward. To see one, two and sometimes three bass rocketing through the air, mouths agape, all after the same frog...well, it was amazing.

Three weeks into the trip we finally heard a good report on the Smallmouth fishing. There was a submerged gravel bar about five miles across Green Lake and the smallies were said to be congregating there. The next morning we bought a minnow bucket full of shinners and and set off for the bar. Two or three passes across it and we had it figured out. We'd cast a lightly weighted minnow at one end of the bar and drift to the other. For the next hour we caught one after the other and none of them were less than six pounds. With each hook-up we had a Nantucket Sleigh Ride as the bass jumped and towed us away from the bar. I've yet to catch so many strong fish in one outing. Worn out and hungry we decided that breakfast sounded pretty good so we motored over to a boat dock and cafe to grab a waffle or two. As we arrived we were met at the dock by a group of guys who asked us what we were using for bait. Turns out they had been watching us through binoculars as they ate their waffles>. Well, as we ate and watched, an entire flotilla of boats headed to the bar...effectively ending our envolvement in the smallmouth feeding frenzy.

Such was my first Minnesota experience. Guiding, fish cleaning, babysitting and some amazing fishing...and I guess I did pretty well at it, for I assumed the same duties for the next two years. Just don't ask me for more details. As Sergeant Schultz would say, "I know nothing!"

Posted by PATRIOT DREAMS at 7:56 AM No comments: