She entered my life some forty years ago and changed what would have been a wasted life of fly fishing debauchery into the life of a slightly respectable husband and father....who fly fishes occasionally.

I had great hopes of luring the beautiful young lady to my idea of a great time...fly fishing. I could just imagine us on the Firehole...landing trout after trout and being the envy of every passer by. There would be books written about us...maybe a movie. Our adventures would be legendary as we traveled the world in search of trout. But it wasn’t to be.

She was up for just about anything that I was interested in, so it wasn’t long before I started dragging her along on my fishing adventures. But a few trips to local streams showed me that she would never share my passion for fishing. Looking back on those days I recognize where I went wrong...starting with our first camping trip to the Illinois River.

It had rained for days prior to our arrival. The river was swollen big time. It was out of its banks and running brown and fast, but that wasn’t going to stop her introduction to canoeing, Alan style. We rented a canoe, arranged for a downstream pick-up and headed into the watery wilds of northeastern Oklahoma.

Did I say that the river was out of its banks? Well, every sharp bend in the normally gentle stream led us through the streamside bushes and trees. And there were lots of bends. With Shirley in the front and her highly experienced white water canoeist (HA!) in the rear, we managed to survive the river, but not without many repeats of the following dialog:

“SHIRLEY ! LEFT! Paddle left! Watch out for that branch! NO RIGHT! Hurry...RIGHT...RIGHT NOW!

“PAY ATTENTION TO WHAT I’M SAYING! I said back paddle NOW! LOOK-OUT! WATCH YOUR HEAD!

(Insert more, and louder, screaming sounds here...these, directed to the rear occupant of the canoe.)

Some time passed before our next canoeing adventure, and oh yeah, I forgot to mention that the river wasn’t the only thing swollen. Shirley was 6 months pregnant at the time.

The actual camping was great. Growing up, Shirley had camped a lot with her folks so she was no stranger to camp cooking and sleeping on the ground. A good camp, great food, an even better companion. I had it made. Tomorrow we go fishing!

I had found a little backwater area where I suspected there might be a bass or two relaxing from the torrent of the main channel. As I landed a few nice Bluegills and maintained a running commentary on the many sophisticated techniques I was employing, Shirley stood patiently at my side, barely able to contain her (feigned?) excitement. Handing her the rod, she managed to make a pretty decent cast. And Eureka...she got a strike. Missed it! Then another strike and another miss. More strikes followed and despite my instructions to lift the rod and set the hook, they all avoided the hook’s barb.

Her frustration mounting, I thought to inspect the fly. And sure enough, there was a reason they were missing the barb. There wasn’t one. Midway up the bend, the hook had broken cleanly off...and as she suspected, I had probably done it before handing her the rod. (No, I wasn’t so insecure to have done it on purpose!)
That was the last time Shirley handled a fly rod.

In the forty summers since, and through the raising of two daughters, there have been lots of camping trips...in fact, Shirley instigates most of them. I’m just along for the ride...and the fishing. Her destiny was to be the “trophy” camp cook and bottle washer. And that was OK with me.

She has one fault, though. She buys tents. “That last one (no matter how big and roomy) just wasn’t big enough.” And then there’s the kitchen. Everything, and I mean everything that is on the market (including the kitchen sink) must be purchased and hauled to the campsite...even making two trips if necessary. Setting up the camp is becoming like the set of Extreme Home Makeover, minus all the hands to help.

But what fun it is. Whether it’s our favorite site just a short drive from home, or a more distant spot we’ll share with the kids and grandkids, we’ll be there this summer. I’ll be fishing. Shirley will be the pretty one tending to the camp.

Thanks Shirley
(and HAPPY BIRTHDAY!)
Posted by PATRIOT DREAMS at 12:33 PM 2 comments: 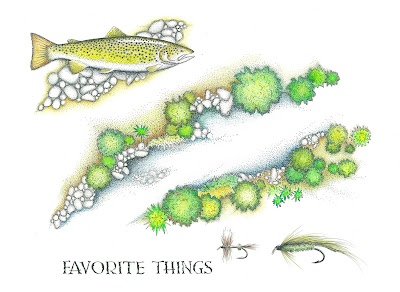 A few quick sketches...not really meant to make a statement, just some practice drawing for a upcoming piece.
Posted by PATRIOT DREAMS at 12:24 PM No comments: