I didn't deserve this!

On Friday evening the Project Healing Waters Program Leads from the Mid-South Region started rolling in. There were folks from North Carolina, South Carolina, Tennessee and Georgia, and the plan was to meet Saturday afternoon to share ideas and brainstorm ways to improve their individual programs. Our friend John Bass, the Regional Manager, put the weekend together and I was invited to update the leaders on my recent activities with TU's Veterans Service Program.

Before we got down to business though, Ryan and I took John Bass to one of his favorite spots on Saturday morning. As we feared would happen, with one exception the creek treated John rather poorly. The recent hurricane brought enough rain to push the West Prong of the French Broad trout downstream and the lack of rain that followed left the creek low and clear. On this little creek, “low and clear” means skittish trout, and they certainly were. 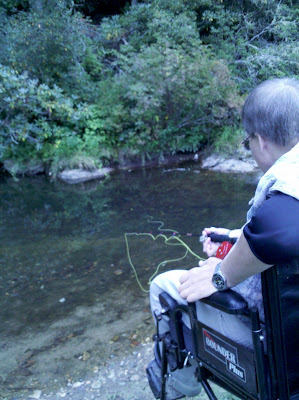 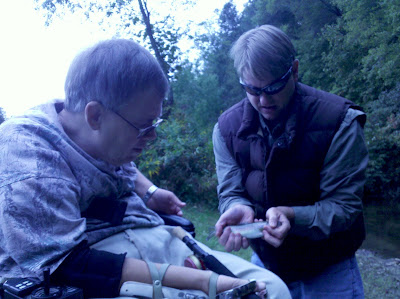 
Saturday’s meeting was very productive, but the anticipation of Sunday’s fishing was on everyone’s mind. Well, it was on mine, anyway. John and Ryan had arranged with Davidson River Outfitters to have the entire private water section to ourselves, and that’s an opportunity that doesn’t come along very often.

I and four of the PL’s that could stay for the fishing met at DRO at 8:30. We reviewed the stream map, spilt up and headed for the water. Rob Lurie and I headed for the section known as “The Island.” 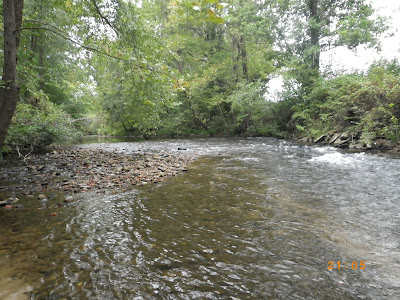 Both of us prefer down and across wet fly and streamer fishing, so downstream we went. I managed to catch a few 6 inch wild rainbows, but to be on one of the south’s premier trophy waters…well, that wasn’t what I was hoping for. Sure, they were pretty, but they were small. Finally, I landed a fish that put a bend in the rod I was testing. A blue gill! I didn’t deserve this. Here I was on a premier trout stream and the best I can do is two little trout and a bluegill?

Yes, I was testing some new equipment on Sunday. LL Bean has long been a great supporter of TU, and earlier this year I received a shipment of rods to distribute to our chapters involved in our Veterans Service Program. I see the remaining rods every time I walk through the garage and today I decided to put one to the test. They are from their “Angler” series, and though very reasonably priced, these rods are fantastic. I’m usually good for a couple of hours of pretty good casting before I tire - even with my TFO 2 wt. - but at the end of my five hours Sunday I was still casting tight loops. I also was testing a wading staff from Springbrook. In recent years my balance hasn’t been what it once was and that lack of balance has led to way too many wobbly knee experiences. For you guys of my vintage – trust me – invest in a wading staff. Even though with all the gear I carry I might be mistaken for the Wichita Lineman, I’ll never again head to the stream without that 3rd leg. 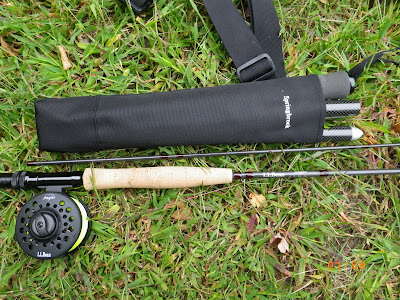 About the time I was really bemoaning my situation and mentally whining that I didn’t deserve this – that I deserved more than two measly little trout and a blue gill, that LL Bean 8 ft. 6 wt. twitched a bit and I found it attached to a very nice trout. Twenty or more inches of nice. Then, thirty minutes later I netted another of the same size. I took a break for lunch, went back to the river and found myself totally alone. All my colleagues had headed for home and I had the entire private water section to myself. Really…all to myself. I fished for another hour and landed the brute shown below. Another twenty incher. I was right in the beginning. Thanks John…I didn’t deserve this.

Posted by PATRIOT DREAMS at 2:21 PM