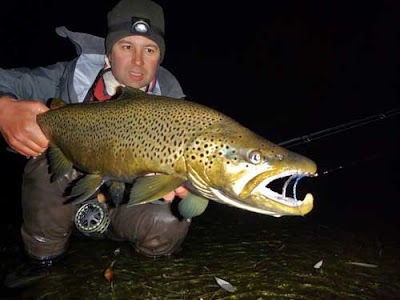 Fishing in the dark. Fishing for big brown trout and not having a clue what I was doing. And as evidence, that picture above aint me.

Wading a big river that I had never laid eyes upon…even in the daytime. Well, that’s not exactly true. We got there just before dark and tried our luck along with a crowd of other anglers at a pool right next to the parking area. We had heard that the big browns were in the area spawning but I was beginning to doubt it. But we were there for the night time fishing and I was imagining that the river would come alive after sunset.

As I recall it was right around Thanksgiving…a little nip in the air. We were right below Table Rock Dam on White River. With the darkness increased, I walked away from that original pool and tried all the proven flies until I could no longer see to cast on this moonless night…to no avail. And then it started. A splash here, a splash there. Then more and more. Big browns were breaching everywhere. That, or people were throwing rocks into the river. Big rocks.

As the splashes were not right at my feet, and since I was a little leary of wading that fast water in the dark, I hoofed it back to the car to get my spinning gear so I could reach the splashes. After tying on a Rapala of about three inches, I would try to judge the distance and direction to the most recent splash. Cast after cast I would jerk at every sound just to be safe. This went on for hours until finally a jerk met some resistance. A nice fish. Heavy with lots of fight. When I managed to pull it onto the gravel bar and get a good view of it, I was quite proud and would have been content to go home with one nice fish to my credit. If only I could have.

As I reached down to grab the big fellow he flipped towards my hand, and yes, he placed one of those treble hooks squarely in the back of my left thumb…right behind the thumbnail. Deep into the bone. Later, we guessed that he weighed around six pounds and I felt every once of it as he continued his flopping around. I needed to get to my knife - and fast. With the hook digging in deeper with every flop, I managed to get my waders down enough to reach my right hand into my left jeans pocket and grab it. I put an end to his antics. It’s a wonder that I didn’t stab myself in the process. So there I was, alone and in pain with a six pound brown attached to my thumb.

Finally one of my buddies arrived at the bloody scene, and thankfully he wasn’t carrying a pair of wimpy hemostats – he had a pair of needle nose pliers with that handy wire cutting thingy up near the handle. Goodbye trout. Now I only had the hook – minus the lure and the fish – stuck in my thumb. Off to the hospital we went.

Branson, Missouri is lit up day and night. At least it was that early 2:00am morning. As we headed through the emergency room doors we must have been a sight. I doubt they had seen many fully outfitted fly-fishers trudging down the halls leaking water from waders and boots at that ungodly hour. Thankfully, other than us and the few docs on duty, the place was empty.

Checking out my situation, one of the docs reached in a cabinet and pulled out a huge hypodermic needle that looked more suited to turkey basting than delicate medical work. He said he was going to deaden my thumb before removing the hook. “Whoa there doc! Haven’t you seen the latest method of hook removal? The one where you get a length of cord and just jerk it out? How ‘bout we give that a try before stabbing me with that thing?"

He says, “Sure, it’s up to you,” so I proceeded to explain the process. At least I thought I had explained it. After looping the cord around the bend of the hook…he yanked on it…I screamed…and the hook remained. I then explained that they needed to press down on what would have been the eye of the hook at the same time he yanked the cord. He tried again and I screamed again…but louder this time. Fortunately my screams had attracted another doctor, and about the time I was agreeing to be basted, he came to see what all the hollerin' was about.

This guy knew what he was doing…knew the process exactly having done it many times. He assigned two orderlies to hold down me and my arm, got a longer cord, and yanked it like he was trying to start an old Briggs & Stratton. I mean, he reared back, and unlike the girly man doc, gave it all he had.

And the hook came out with no pain at all. Back to the river we went.

The point of the story? Print the directions below and carry it in your vest. That, or scream REALLY loud when the first doctor blows it.