World War I – known at the time as “The Great War” - officially ended when the Treaty of Versailles was signed on June 28, 1919, in the Palace of Versailles outside the town of Versailles, France. However, fighting ceased seven months earlier when an armistice, or temporary cessation of hostilities, between the Allied nations and Germany went into effect on the eleventh hour of the eleventh day of the eleventh month. For that reason, November 11, 1918, is generally regarded as the end of “the war to end all wars.”

As we know, mankind being what it is, it didn't work. Wars continued, and today on 11/11/11 as we remember and honor once again the service of so many fathers, mothers, relatives and friends from so many wars, let's all remember to thank one of the survivors. Their service to our country is greatly appreciated, and not taken for granted. Thank you very much for the sacrifices you, and your families, have made.

Each year at this time, and way too many other times, I think of those we have lost - and I think of my friend Roger. I first posted the following rememberance two years ago:

We had killed more than we should have but that’s the way it usually was. In truth I should say that Roger did most of the killing. I did a lot of the shooting. Not to say that I was a bad shot...I was average on most days and a little better on some. Roger never missed, and that fact led to his demise. So right up front, this story doesn’t have a happy ending.

Roger and I were friends. Not the type that hung out together to do just about anything anytime; we were huntin’ buddies, and that’s about all. Other than our desire to spend most mornings before school and every weekend in the field, we were polar opposites. Roger had little if any known interest in girls, fishing or cars and could have cared less about cruisin’ the strip. So we went hunting. From the 1st of September and the opening of dove season, through the end of goose season in January, Roger and I were armed and dangerous. Dove, quail, pheasants, turkey, ducks and geese; deer, squirrels, rabbits, coyotes and all manner of furry or feathered creatures would have done well to lay low. Roger was a hunter.

His parents were older than mine, in fact, if told they were his grandparents no one would have doubted. His dad was retired Air Force and was a very quite man. His mom was even quieter. They had moved to Tulsa upon retirement after a long tour of duty up in the Maine woods where Roger cut his teeth on .22’s and scatter guns. Roger and I were juniors in high school when we met.

Many weekends during duck season we would travel out to the Great Salt Plains in Roger’s Scout. We would drive the perimeter of the refuge looking for ponds. Situated well in the Central Flyway, the place was thick with waterfowl of every variety and every pond or puddle was sure to hold a few of them. Setting out a raft of decoys would have worked of course, but Roger was into stealth...so it was spot, park, crawl and shoot...and shoot, and shoot and shoot again. It usually went something like this: Rising up over the bank we’d spook the ducks. Up they would go and down they would fall. I would empty my gun and figure that I hit a couple of them. Roger would do the same and know that he hit a lot of them. Ten shots and thirteen birds between us was not unheard of. It was that way all the time. Roger never missed, and out of kindness he would always give me credit for hitting a few...whether I did or not. 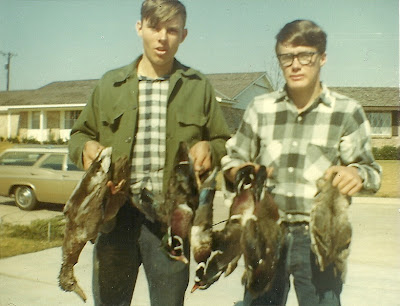 I always had the feeling that his family had something against grocery stores. I was sure that they lived largely on the game that Roger brought home. My family had a preference for store bought, so it was a given that whatever we bagged would end up in Roger’s freezer. I can recall just one exception. A few years earlier Dad had bought a state of the art Hasty Bake grill. He quickly became a grill master with his steaks, roasts, burgers and chicken recipes. One day dad stated that he’d like to try grilling a duck, so one of the fatter mallards was selected and set aside. Dad had found a recipe in Sports Afield that he wanted to try. On Sunday the grill was fired up and the duck...heavily basted with wine, was prepared. The aroma was amazing...the duck was disgusting. Roger’s freezer stayed full.

We hunted together through our senior year. Every species, every season...building memories almost daily. Time passed, we hunted some more and then it came to an end. We graduated from high school and Roger volunteered for the Army. I got a few letters from him. He had gone Airborne and was as gung-ho as anyone you ever knew. After setting every marksmanship record for every type of hand held weapon the Army had, he was shipped off to ‘Nam as the shooter in a two man sniper unit.

Sometime in 1968, while I was going through training in the Air Force I was called to the commander’s office. Word had come down that while on patrol, Roger had stepped on a land mine and he was gone. I had wondered about how he would reenter the world when the Army had used him up. I had wondered if he could do it. Would he still hunt? Would he be even more deadly? What would he hunt? Would we hunt together again?

I found his name on The Vietnam Wall a few years ago. That tragic black wall with over 50,000 names on it. Not all were like Roger...some were supply sergeants, some were medics, some were whatever. But all were heroes. I thought of Roger a few days ago when reading about something called Honor Air...the project that flies our aging WWII heroes to their memorial in Washington. I thought of him when I read of the passengers at the Asheville airport rising to applaud a guy in uniform just back from Afghanistan. I thought about the waste. I thought about the times and the differences. I wondered who remembered. I remember Roger.