Whenever overhearing two or more people from New Jersey talk about where they are from, invariably the conversation focuses on what Interstate Exit they live near to.  Having traveled those major highways a few times myself, for years I assumed that those highways and their bordering, over populated hamlets were the sole focus of those poor people’s lives and I could not imagine such an existence.  And I could not have been more wrong. 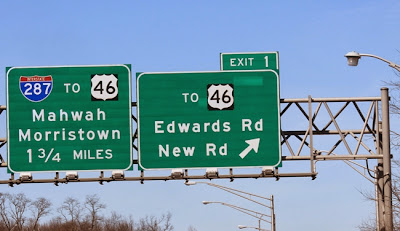 Last Friday morning I began a road trip to Somerset, NJ – a road trip that would forever change my perceptions - to meet with 10 Trout Unlimited chapter presidents at their quarterly State Council Meeting to discuss and provide details on our Veterans Service Partnership, and for the next 700 miles and 12 hours of windshield time I struggled to stay alert through the monotony of the drive.

Pulling off the interstate and heading into the wilds of the Garden State was a treat and a pleasant surprise.  The rolling hills of vibrant fall colors; the winding two lane blacktop and the small Rockwellesque communities that lined it were beautiful.  The many horse farms and their adjoining mini-mansions were a far cry from the apartment complexes and shopping malls along the interstate.  Maybe the tag “Garden State” is appropriate after all.  Who knew? 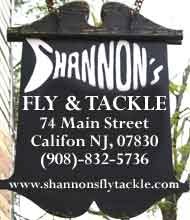 Our first stop was in the small town of Califon, at Shannon’s Fly & Tackle Shop where I was to pick up a license for the day and get to know a few of the locals.  Shannon’s is not your local Orvis company store, but a true Catskill style fly shop which opened its doors back in 1973. And incidentally, Shannon's was awarded Trout Unlimited's first ever Gold Endorsed Business Award for their regional expertise and conservation efforts.  Great folks and great service…service that included removing a treble hook from the thumb of an unfortunate angler that stumbled in while we were there.  Full service indeed.
Our next stop was at a little parking area on the banks of the Raritan’s South Branch.  As Rich and I, along with his young daughter, got geared up I soaked in the beauty of the stream and gave thanks for the chance to enjoy such a special place.


Rich was determined to practice his nymphing techniques, while I as usual attached a meaty streamer to my line.  As Rich worked the waters along with his daughter, we leap frogged from pool to pool with no success at all.  Rich thought he felt a tug or two but I felt and saw nothing.As I was tying on what must have been my tenth fly of the day, Rich suggested that I move a little further downstream and give the “Split Rock Pool” a shot, saying it was known for the number of quality rainbows that called it home.    I tied on a brown Girdle Bug and headed downstream.
After surveying the pool and deciding that a position right up against the Split Rock would give me a good shot at effectively covering the pool, I began casting.  Just a few casts in, what superstition and some experience has taught me to be a good omen ocurred.  I was buzzed by a Kingfisher.

﻿
And sure enough, on the next cast I was onto a good fish.  While I was in a good position to cover the pool with my casts, I was in the worst possible position to play and land a large rainbow.  The only way to get him to the net was upstream through a pretty hefty current.  After a few good runs and an incredible acrobatic display the big guy - around 20 inches - finally came to me.  YES!  My first New Jersey trout!
Then, being the ever generous host, Rich directed me to the next hole, one called “The Measuring Pool” to try for a large brown that tended to hang out there.  I insisted that Rich give it a try first as I relaxed and watched him methodically work a few seams with the nymph.  After a while we decided that it was about time to head back to the parking lot and Rich turned the pool over to me.  Well, as Rich headed back upstream, and after I’d made about about a dozen casts into the pool, what should appear again but the Kingfisher!
Fish on!  This one was half again as big as the first one and after a fight that I’ll never forget he was finally coming to the net.  Maybe I needed another over-flight of the Kingfisher (more likely, more skill) because about two feet out from the net the barbless hook separated from his jaw and the line went slack.  Oh well, I was honored to do battle with such a beautiful creature.
The meeting on Sunday with the chapter presidents went well with the promise of bringing more New Jersey TU chapters into the Veterans Service Partnership, but my mind wandered a bit. I couldn’t help but being amazed by the largely unknown beauty of the state – and wondering if I could train a Kingfisher to be my fishing companion.