After who knows how many blog postings that have had absolutely nothing to do with fishing, here one is!  Yes, I went fishing.

We joined up with our daughters and their families at the exotic location of Hunter’s Island just off the South Carolina coast.  This was to be my first ever opportunity to cast a fly into salt so I packed my 8 weight and the few Clouser patterns I had on hand and we headed for the beach. 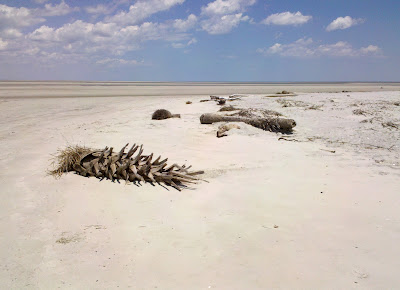 A week before leaving home I had called Bay Street Outfitters in downtown Beaufort to ask about the fishing and was able to talk to a guy that sounded very knowledgeable about the fly fishing in the area.  I asked about fly patterns and got some good info on the redfish opportunities.  I told him I’d pick his brain further when I arrived in town.  So our first stop was to the fly shop.
He wasn’t there.  He was guiding in Russia and the help I got was of questionable value.  My next stop was at a hardware store to buy a license and the advice I got there got my attention.  The clerk told me that they had been catching bull redfish right off the beach of the island.  That’s more like it!
With that information it didn’t take me long to hit the beach.  After puzzling over the type of bugs that inhabit this jungle island – 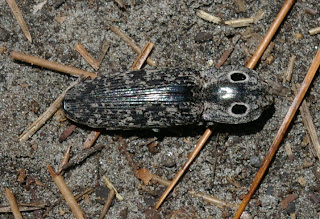 - and scarring off a few raccoons that had a fondness for watermelons – I headed across the sand for the beach.   I was fascinated by the patterns the tides had left in the sand.  They reminded me of the satellite shots of the sands on the Arabian Peninsula that I’ve studied on Google Earth from 50,000 feet.  A different cause of course, but the effects were remarkably similar. 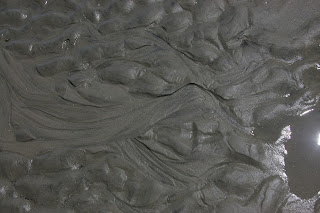 Okay, so while others in the family (the sane ones) were enjoying that other thing that beaches were made for, I went fishing. 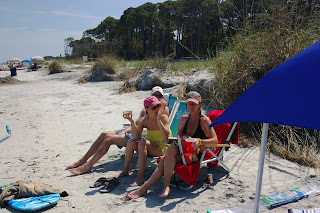 
I walked the beach and fished for about two hours and never saw a fish.  So much for the advice I got from the clerk.  I began to realize that without some really expert advice I was doomed to failure.  It’s a big ocean out there and finding fish in it aint gonna be as easy as spotting trout in a mountain stream so I stopped into a visitor center, picked up a few brochures and called the one that bragged about their kayak rentals and fly fishing knowledge.  I was assured that yes, the reds were there, they were biting and that they could put me on them.   Chad and I arranged to meet up with them on Sunday morning.
I should have known that something was amiss when Lenny, our guide, rigged up a spinning outfit and placed a bucket of fresh shrimp into his kayak.  Turns out that he has never fly fished and they have never guided anyone that had!  Oh well, we're here – lets launch these things and get after it.
Lenny said there was a good weed bed just up past some docked shrimp boats so we began paddling north – against the incoming tide.  (When you are told that the tide is nine feet, please understand that it moves much like a river.  And understand that an outboard motor is advised if you are out of shape.)  We paddled for about a mile to reach the designated “Hot Spot,” always watching for tailing redfish.  Do you see them in this picture? 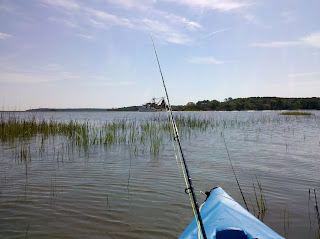 Neither did I.  Not from this view or any other.  The only signs of life I saw during our three hour cruise were some herons and few egrets - and a guy standing on the bow of a passing shrimp boat.  Forrest, was that you?  Captain Dan? 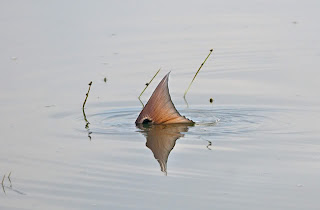 Shirley and I had a great time…
﻿ 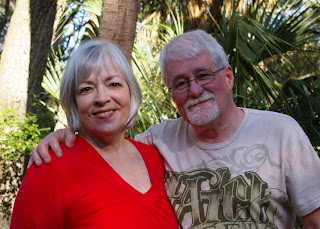 Posted by PATRIOT DREAMS at 6:05 PM