Note: In the coming weeks Shirley and I will be starting up a new online venture - Jude 24.  So what is Jude 24, you ask?  Well, many years ago, back in the day that jewelry design and production was the only thing on my plate, among other products, we created and marketed a line of Christian jewelry. (Regular readers might have seen hints of this a few posts back...)

In the years since and through many moves across the country, we have stored all of my jewelry equipment in the garage with the thought of dusting it off someday.  That day has arrived.  Watch for www.jude24jewelry.com - coming to a computer near you soon! 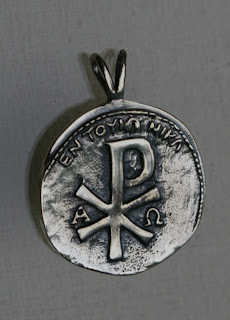 Hand sculpted in Sterling Silver to remind one of an ancient Roman coin, the Chi-Rho symbol is an early Christogram and when combined with the Alpha and Omega, an acronym is formed with Christ’s words, “I am the Alpha and the Omega”.


He had this emblem put on his soldier’s shields, and they went on to win the Battle of the Milvan Bridge outside Rome.  St. Constantine became the first Roman Emperor to convert to Christianity and made Christianity the Roman Empire’s official religion in the fourth century.