The Liberty Tree... The Patriot's Dream 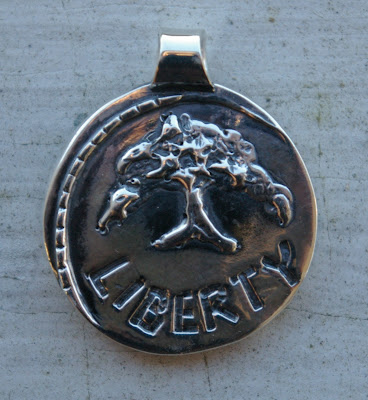 On 14 August 1765, a crowd gathered in Boston under a large elm tree at the corner of Essex Street and Washington Street, originally called Orange Street, to protest the hated Stamp Act. It was the first public show of defiance against the Crown and spawned the resistance that led to the American Revolution 10 years later.

Because the Act applied to papers, newspapers, advertisements, and other publications and legal documents, it was viewed by the colonists as a means of censorship, or a "knowledge tax," on the rights of the colonists to write and read freely.

Back in the day I created a few different ancient coin replicas, and with what's going on in today's world the idea for this new one came to my wife. I created this to celebrate the ideals of our founders and to remind the current generation of their sacrifices and wisdom.  Not taking sides politically, I truly believe that we must re-embrace those ideals.  The pendant, the first in a separate line of jewelry titled, PATRIOT DREAMS (See America the Beautiful), is done in .925 Sterling Silver and is a one- of-a-kind.  I've signed it on the back and and its slightly larger than a US quarter.

If you are interested in this at just 75 bucks...just shoot me an email at clearwatermemories.gmail.com

“Liberty, when it begins to take root, is a plant of rapid growth”
Geo. Washington in a letter to James Madison dated March 2, 1788
Posted by PATRIOT DREAMS at 11:09 AM