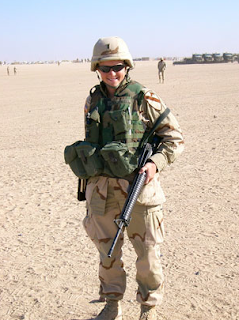 I want to encourage each and every one of my friends to vote for a friend of ours, Melissa Stockwell, who has been nominated for the ESPN ESPY award.

Why you ask? Well, Melissa is a combat wounded veteran of the war in Iraq. Melissa was leading a convoy on a mission through Baghdad when an improvised explosive device (IED) took out her unarmored Humvee.. The blast from the IED took off Melissa’s left leg. Her wounds required 15 surgeries, and she spent a year recovering and undergoing rehabilitation at Walter Reed Army Medical Center where she became involved in the Wounded Warrior Project. She took part in athletic events designed to improve the strength and confidence of newly injured soldiers.

Melissa was medically retired from the Army in 2005 and her military decorations include the Purple Heart and Bronze Star. She has since become a certified prosthetist and is actively involved in helping other amputees get back on their feet.

She has completed multiple triathlons and has become a competitive swimmer. She competed in three events in the 2008 Paralympics and won the 2010 Paratriathlon world championships. And she is an avid fly fisher – recently sampling the waters of western North Carolina with our buddy, Ryan Harman.

In addition to serving as a board member of the Wounded Warrior Project, Melissa and her family are great supporters of Project healing Waters

I think those are some pretty good reasons to cast a vote for Melissa. So go to this link http://espn.go.com/espys/#/voting and click on Vote by Category and choose the Female Athlete with a Disability Category to vote. Voting ends on July 9th. Melissa’s courage has been a huge inspiration to other vets and to all with whom she comes in contact. Melissa was there for us, let’s be there for her!

Thanks
Posted by PATRIOT DREAMS at 12:46 PM