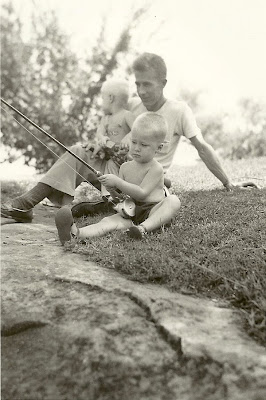 My Dad holding my brother Bruce, and me with the fly rod on an un-named Ozark stream in the early 50"s.

Yesterday Trout Unlimited, on their Facebook page, wanted to know how their readers got hooked on trout fishing. They asked for stories and here's mine...re-posted from two years ago.

After being weaned on Bluegills and Smallmouths my Dad introduced my brothers and I to the Rainbow. Dad grew up in SW Missouri, just a few miles from Roaring River State Park and he spent his early years casting a fly to the ancestors of the trout that we were introduced to.
Many of my earliest and fondest memories are of watching Dad expertly lure these gorgeous creatures (with a casting stroke that would rival the best of the FFF Master Casting Instructors), and the year that I was turned loose on them is etched in my memory. I don't recall the exact year...I must have been 10 or 11, but I'll never forget that summer of learning. We must have spent at least eight weekends camping there and I know that I spent from dawn to dusk slingin' flies at those trout. I believe my first rod - the one that I was using - was a white fiberglass Shakespeare model with an "automatic" reel, and I recall that I caught a lot more trees than trout. In fact, it was the last weekend of the summer before I managed to hook and land one of them. I remember the pool - it was the one below the bridge right in front of the lodge - and the fly was a red and yellow Woolly Worm. (Back then, in the Ozarks, they were Woolly Worms - not Woolly Buggars!) I'll never forget the feeling I had...and even if he were still with us, I could never thank Dad enough for that introduction.
Posted by PATRIOT DREAMS at 8:32 AM