Sometimes it all comes together... 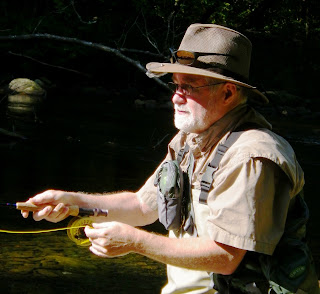 Your humble correspondent, plying the waters of the Raven's Fork
This past weekend 55 disabled vets gathered for camaraderie, good times, good food and some unbelievable trout fishing. Joined by professional guides and numerous volunteers, this collection of heroes was the largest in the history of Project Healing Waters.

A special “THANK YOU” goes out to Rivers Edge Outfitters and Joe, Steve and Chris – the proprietors of that fine establishment in Cherokee, North Carolina - for the hospitality they offered us over the weekend. Their beautiful shop was the gathering point and supply center for the weekend and they were the best hosts that one could imagine. Each of them shares a passion in seeing that our vets are rewarded, honored...and put on fish!

The vets split up on Saturday morning and headed for the waters. I say “waters” because the Eastern Band of the Cherokee nation had made all of their waters available to us. Some fished the Oconaluftee, some fished the Raven's Fork (including the Trophy Section) and some fished the fantastic little stream right behind the shop. Every vet was teamed with a volunteer guide and everyone caught fish, including some very nice ones.

I was left to my own devices on this first morning so I teamed up with a few of our wheel-chair bound folks and we headed for “The Island.” In no time at all everyone was onto fish. Beautiful Rainbows and brookies were caught one after the other, including what might just have been the largest fish of the weekend. Nancy was positioned at a promising looking run when her line went tight about the time that the guides starting hooting and hollering those sought after words, “It’s a PIG!"  Her rainbow went every bit of thirty inches.

I headed a bit upstream to try my luck. The water was low and clear, but with the canopy of trees and the early morning sun angle, it was hard to see if any fish were there to greet me. I decided to go with my old standby...the Yellow Wooly, and soon was landing a brookie of 20 inches.

Shirley had bought me a new camera, one of those water and shock proof jobs that you can even use underwater. It had arrived the day before we left and I couldn’t wait to try it out. As the rainbow was catching his breath I fumbled through my vest to find it and by the time I got it out I was afraid to use it. These Smoky Mountain trout give their all in trying to evade capture and I just can’t stand the thought of one going belly up just for the sake of a picture. So I left the camera alone and went to work reviving the trout. I’ll have to quit fishing alone if I’m ever to get some good shots.

The run provided a few more good brooks and a rainbow or two before it was time to load up and head for the shop for lunch. All of us met up to swap fish stories as we enjoyed some delicious grilled burgers and dogs. I pretty much chilled out the rest of the day, watching some vets fish the run behind the shop, as Shirley and Billy Davis’ wife Brenda tried to take some more money from the tribe’s casino. (Their morning adventures there had proven effective, and ignoring my advice to quit while they were ahead...they went back.)

Saturday night we were treated to a banquet and auction at one of the town’s larger community centers. The festivities began with an inspiring presentation of the colors done by the local VFW, followed by the Pledge of Allegiance led by a group of young Cherokee children who followed that by singing the National Anthem in their native language. We had a Cherokee Indian story teller who entertained us with a bit of their history, including some very interesting stories about their ancient ways and legends.

The evening’s meal was provided by Lawrence Krump – an amputee that I had previously fished with on the upper French Broad. I had no idea that he was a barbeque master, widely known for some of the best BBQ in western North Carolina. Lawrence’s reputation is well deserved. The raffle, the silent auction and its live version went well, with a good number of our guest opening their wallets in support of the cause.

Sunday found me on the trophy Section of the Raven’s Fork...on the same section that I had “judged” in last years Rumble in the Rhododendron. At that time I of course couldn’t fish, I just got to watch. Sunday was to be different. The stretch of water was gorgeous... perfectly suited to my preferred style of fishing. A long run with varying depths and structure, well shaded with just a bit of a ripple on it. Absolutely perfect for swinging wets and streamers.

What to use...what to use? Well, a Nub Worm of course! I tied on one with a green chenille body wrapped with black hackle trailing an orange tail. The upper end of the run gave me no action, but as I approached an overhanging Chestnut tree my hopes rose as I saw a small dimple up against the far bank.

My first cast brought a strike. The fish had grabbed just the tail, managing to avoid the hook’s barb. After a two minute wait, on the second cast he found it. I still hadn’t seen him but there was no doubt that he was big, and when he went into the backing on his first run there was no doubting it. Well into twenty inches, when he came within eyesight I saw a beautiful rainbow, and after a few more runs I held in my hands a wonder of Creation. A swimming silver bullet of muscle and guile.

The weekend was as perfect as one could be.