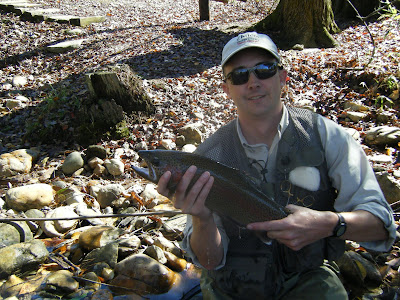 When I began sculpting trout a few years ago I was in dire need of reference material. At that time I hadn't collected a lot of photo references so I was taking advantage of every available opportunity. I was bumming old issues of Fly Fisherman and other journals from my buddies and I was watching the best of the fly fishing shows on TV. Any opportunity to get more familiar with my subject matter was taken. One Saturday morning I happened upon something called Fly Fishing Masters on cable. It was a national competition to select the finest fly fisherman in the land. The weekly episodes and the qualification trials were coming to an end and they were fishing that day at a place called Noontootla Creek in the mountains of north Georgia. Kevin Howell (who an hour later had won the competition)of Davidson River Outfitters was in the finals, so the program got my immediate attention.

Sure, the fishing was great...but the scenery, the creek...was just as inviting. I promised myself on that Saturday morning that I would someday fish Noontootla Creek.
Fast forward to 2 years ago. I was working my booth at the FFF Southeastern Conclave at Callaway Gardens and happened to meet Jimmy Harris, the proprietor of Unicoi Outfitters. From researching Noontootla Creek I was aware that Jimmy was one of the select few that had access to this prime water, so a plan began to take shape.

At about the same time I was getting started doing colored pencil commissions of catch and release trout and I thought that Jimmy, with his reputation and his access to such great private water, might be able to help me jump start the program. So I reviewed his website once again, picked out an image and got to work drawing. A week later I emailed the artwork to David Hulsey, who with his wife Becky, runs Jimmy's store in Blue Ridge, GA. The plan was to create an ad that included the artwork and the photo that it was based on, which would then be displayed in the store. Well David loved it...but. But he couldn't use it. Turns out the fisherman in the photo, unbeknownst to me, was one of their guides...and that particular guide had just been fired! Back to the drawing board.

This time I picked another photo. A photo of a guy that I didn't figure would be fired anytime soon. I picked a photo of Jimmy...and a beautiful rainbow trout that he had caught on Noontootla Creek. Well, Jimmy loved the final result and I offered him the original artwork...for a price...a day on Noontootla Creek. Jimmy agreed, but under one condition...that he wouldn't "guide." He wanted to fish, and who could blame him?

So this past Sunday, along with my son-in-law Chad, Jimmy and I headed out of Blue Ridge for the short drive to the creek. It was everything I remembered from that Saturday morning TV show. The water was in perfect condition and with the fall foliage at it's peak, we had the place entirely to ourselves. I, as usual, headed downstream while Jimmy and Chad headed up.

Olive Wooly Buggars, along with a couple of split shot(apparantly these big native rainbows don't care for coneheads), were supposed to be the thing, so that's what we started with. I spent the next two hours drifting them down deep through the runs with no luck at all. I varied the number of shot...tried droppers of all sorts...fished them upstream and down...even put on a strike indicator...all to no avail. Major frustration. Here I was on one of the premier trout streams in the southeast, and I hadn't had a bite! I even (horrors!)tried the old San Juan Worm. A little later, in desperation, as I was about to tie on an egg pattern that a guide on Big Cedar had forced upon me, I came to my senses. "STOP Alan! You don't have to do this! Dance with the one who brung you!"

Yep, I tied on a black and yellow marabou...with not one bit of weight. I was either going to fish the way I wanted to and hopefully land a fish or two...or I was going home skunked again. It didn't take long. Within just a few casts I had caught one of the beautiful, but small, par marked rainbows that grew up there. And not long after that, when fishing a very narrow and fast run I hooked into a lunker.

When we were gearing up back at the truck, Jimmy had made the comment that my old 1950's vintage Medalist made some sweet music when a fish took off. Well, had he been there at the time of this rainbows first, second and third runs...he would have heard a symphony. Jimmy had warned me about the strength of these fish, and it was no exaggeration. My old Fenwick had never had such a workout. Two times, as I stumbled my way downstream, I was able to get the fish out of the faster current and near to shore, and two times she caught her breath and took off again. Finally, after what must have been fifteen minutes, I got her about half way into the net and to the shore. I was praising the Lord...and shaking like a leaf. That fish, without a doubt, was the finest rainbow I have ever caught. I managed to get the hook out and get her fully revived, but I just didn't have the heart to keep her longer while I would have fumbled to get out my camera and record the moment. I layed my rod alongside for an estimation of her length (24 inches) and eased her back into the current.

Meanwhile, Chad and Jimmy were having some fun of their own. Chad couldn't get Jimmy to fish though. That man is such a teacher...such a guide...that even though he was carrying a rod, he rarely used it. Rather, he was teaching the finer points of nymphing to Chad (a situation that I'm not at all pleased about, as Chad will now be out fishing me with even greater regularity!) and netting his fish, including the fine rainbow that I've pictured above. From what I heard, Chad's battle was just as epic as mine.

What a day it was!
Thank you Jimmy!
Posted by PATRIOT DREAMS at 9:22 PM