I can't help it. When I hear the word "Rumble" it takes me back to my high school days in Tulsa. Back in the late 50's and early 60's, as documented by a fellow high schooler, S.E. Hinton through her book 'The Outsiders", and Francis Ford Coppola in his film of the same name...a rumble meant trouble. I confess to more familiarity than I should have with the theme of the book. No, Pony Boy wasn't a friend of mine. I was on the other side of the tracks from him and the guy that Patrick Swayze's character was based on. This rumble was different. No greasers, no socs'...just some of the best fly-fishers in the nation.

The North Carolina Fly Fishing Team and the Eastern Band of the Cherokee Nation put on the annual Rumble in the Rhododendrons on the outskirts of the Great Smokey Mountains National Park and I got to spend Sunday as a “Judge.” The event is arguably the most prestigious fly fishing competition in the country and as a Judge I was allowed to spend the day documenting the catches of Kevin Howell and Paul Thompson.

Those that follow fly fishing are familiar with those names. Kevin is the owner of Davidson River Outfitters and has been featured on numerous TV shows, magazine articles and the internet, and is a favorite to out fish just about anyone he’s up against. A past winner of the Fly Fishing Masters competition, Kevin knows his way around a trout stream.

And Paul Thompson, a three-time champion of the Total Outdoorsman Challenge put on by Field & Stream magazine, is no slouch either. In addition to being a first rate fly-fisherman, Paul is rapidly developing into one of the better artists that I’ve run across. He specializes in ‘Scratch Board” art and his creativity and attention to detail are amazing.

Needless to say, as last year’s winning team, they entered this year’s event as the favorites. On Saturday, in the casting competition they finished first, giving them first choice of the beats to be fished on Sunday...they picked my beat.

Have you ever had the chance to study the techniques of two masters of their craft? I spent a total of four hours studying the techniques of two of the best as they fished in VERY difficult conditions. The Raven’s Fork was high, fast and more than a little off color. The rains that caused the flooding throughout the southeast over the past two weeks did not spare this little corner of trout fishing heaven.

The fishing competition was divided into two, two hour sessions. The winners of the first session would be allowed to have their choice of beats for the second session. Well, Kevin and Paul walked away with the first session and to my delight elected to stay on the same beat for session number two. Class continued!

Fishing as deep as they could with no added weight allowed, my guys managed to score five nice trout in session number one. Session two was different. They struggled just as much as the other teams did in the first session and it led to an overall finish of fourth. Competition is that way. Especially if you're up against the best in the land. Can I put the lessons learned to good use? Time will tell, but let me tell you...these guys are good. All of them. You'll be able to link to the Rumble's website in a few days to grab the details.

As great as the competition was, the true highlight of the day was getting to meet and visit with Curtis Fleming of Fly Rod Chronicles. If you've seen his weekly show on The Sportsman's Channel, you know that Curtis doesn't put on a slick "how-to" clinic. His show is as down to earth as the last outing you took with your best buddies, and regular viewers know that Curtis has a soft spot in his heart for our veterans. Many of his shows have featured Ed Nicholson, the founder of Project Healing Waters, and many of the Wounded Warriors that I've had the privilege to get to know over the past year. John Bass, Josh Williams, Billy Davis, Sgt. Mancini...the list goes on. For the second year in a row, Curtis and his crew were at the Rumble to record the competition.

As I had previously created a commemorative print that Project Healing Waters is giving to our vets and volunteers, it was only fitting to give a framed one to Curtis, one of our organization's greatest promoters. It was my honor to present it to him. And for those of you that might wonder...the Curtis you see on TV is the same guy that I met on Sunday. His kindness and accepting nature is, (and regular viewers will recognize this phrase), "Bigger than Dollywood!"

Tools of the trade...just a bit of Kevin and Paul's equipment 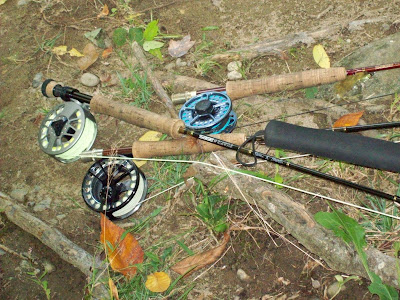 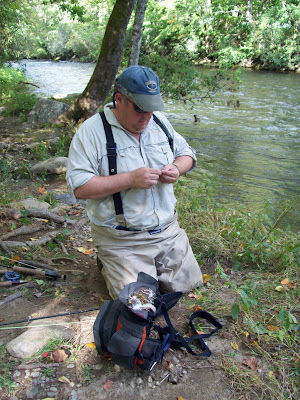 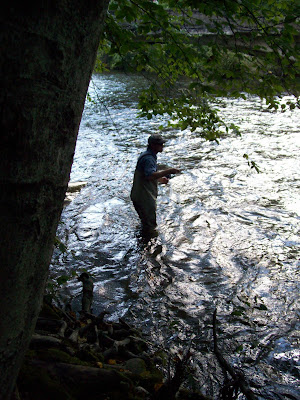 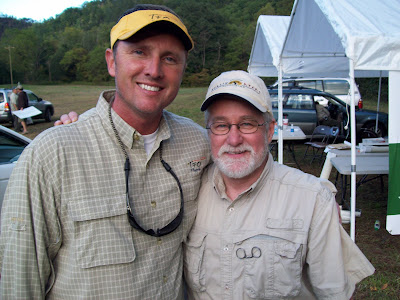