Triumph of the Human Spirit

Our TU volunteers within the Veterans Service Program are very good at teaching disabled veterans the sport we love, but the activity I witnessed last Friday will never, ever, be replicated in our Veterans Service Program. I’m referring to a very special part of the groundbreaking ceremony I attended for the Boulder Crest Retreat in Bluemont, Virginia.

Ken Falke, a 21 year combat veteran of the U.S. navy and retired Master Chief Petty Officer, has provided his beautiful 37 acre property to create a free, first class rural retreat for America’s seriously wounded warriors and their families to reconnect and recover from the injuries of war and we were honored to be invited to the ground breaking ceremony. Our opportunity to partner with Ken and his organization is what the VSP is all about.

After the obligatory speeches and expressions of gratitude we were invited outside to witness one of the more impressive sights that I have ever seen. There at 12,000 feet, circling this little piece of paradise in the Virginia Mountains was a small plane, and right on schedule a small dot appeared in the sky behind it. That small dot was Dana Bowman. You might remember a news story about Dana. 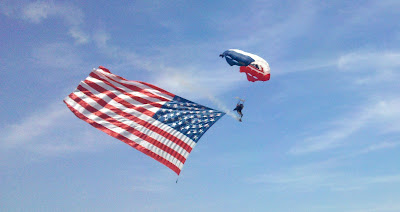 He is a retired Sergeant First Class with the U.S. Army where he was a Special Forces soldier and a member of the U.S. Army’s elite parachute team, the Golden Knights. Dana didn’t make the news for his combat exploits. Back in February of 1994 Dana and his partner were practicing a sky diving maneuver known as the Diamond Track. The maneuver calls for the jumpers to streak away from each other for about a mile and then turn 180 degrees and fly back toward each other crisscrossing in the sky. Dana and his partner had demonstrated the Diamond Track more than fifty times without a mistake, but this time was different. Dana and his partner collided at a combined speed of 300 mph, instantly killing his partner, who, when he passed by Dana severed both of Dana’s legs with his outstretched arm.

As told on his website, www.danabowman.com, nine months later he turned this tragedy into a triumph when he became the first double amputee to re-enlist in the United States Army. Bowman re-enlisted in the United States Army airborne style, skydiving with his commander into the ceremony. After Dana’s re-enlistment, he became the U.S. Parachute Team’s lead speaker and recruiting commander.

I and the 200 attendees at the Boulder Crest groundbreaking event were honored to be in his presence. While we will never replicate his sky diving performance with the veterans that we serve, we can all take from Dana’s life story . . . he is but one of many that have an incredible story of triumph of the human spirit.