At the FFF Southeastern Rally last year the always thoughtful Shirley raised her hand repeatedly during their live auction to purchase a guided trip on the Soque River in north Georgia. Ever since moving to the southeast I have seen the pictures and read the stories of the monster trout that are found there, so I was naturally thrilled with her good sense and her persistence to win the thing. The package she won was donated to the auction by Charles Henderson of Southern Sweetwater Anglers, and it was a half day trip for two anglers on Charles' trophy section of the famed river.

It was a no-brainer that this trip was going to be son-in-law Chad's birthday present, and since his birthday back in September, we have anticipated heading into those beautiful north Georgia mountains to meet up with a toothy, hook-jawed rainbow or two. We had a year to redeem it and the year was ending on Memorial Day, so what better way to spend Mother's Day weekend than packing up our families - mothers included, of course - and heading for the river? 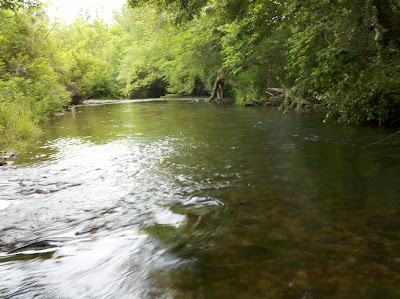 A few nights before leaving I spoke to Charles about the river conditions and to pick his brain a little on what we could expect. He said if we were lucky we might get some top-water action with hopper patterns and he recommended nothing smaller than 5 weights and 4x tippets. I'm likin' it already.

When we arrived at his lease - just a stones throw from the Batesville General Store - I was a little surprised at the size of the water. This so-called "river" would have barely qualified as an Ozarks "crick," but it was wild and beautiful, crystal clear and as fishy lookin' as any water, anywhere. Charles and Chad headed downstream and I headed up. I hadn't been in the water but a few minutes and I noticed a trout rising no more than a good double-haul upstream of where I entered the water. As the place was too canopied for a double-haul, and I can't do one on a spacious football field anyway, I went into my excuse of a stealth mode and headed up to his position. 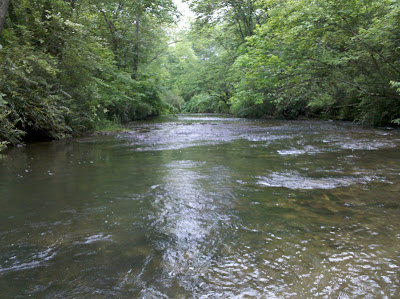 My dry landed perfectly, drifted over his position - and nothing happened. After three more reasonable casts I reeled in to change patterns, and as if to mock me, the trout rose two more times while I was fumbling through my fly box. Over the next little while I tried a couple of more patterns to no avail and finally conceded defeat. I gave him a wide berth and headed upstream with the intention of fishing my way back down to him with a wet. Hugging the far bank, I moved about fifty yards up and sat down on a mid-stream rock to take in the beauty and allow the fish to settle back in.

As any painter would know, to make "green" you mix up a bit of blue and a bit of yellow. The shades of green that you can create are virtually endless, and thanks to an early spring and ample rains, they were all on display on this overcast late May morning. But for the patter of a light rain and the ocassional crow calling out to his brethern, I was surrounded by the beauty and the silence that we all cherish when on a trout stream. That is, until the dogs started howling. Distant at first, the ruckus was becoming louder, closer, and more frantic as the hounds chased what was surely a 300 pound black bear towards my little slice of peaceful paradise.

Of course it was a bear! What else could rile up every dog in the county? The more I thought about it, the surer I was, and the larger the bear became. I was imagining the headline . . . "Headless North Carolina angler found floating in north Georgia trout stream." Well, I wasn't going to sit on that rock and let him have me. No sir, if I'm going to be attacked by a bear I'm going to be fishing when it happens.

As the dogs and the bear changed course at the last minute and faded off into the distance from whence they came, I was back in position to make a presentable drift with the black Woolly to my real nemesis, and sure enough, on the first swing through his lair he was on! After a few moments I brought him alongside, slipped my forceps around the Bugger and released him back to the river. Though certainly not of local bragging size, the little 12 incher was beautiful. I continued on downstream and had a few more hits, but other than seeing the flash of one nice fish - one very nice fish - the lunkers of the Soque had eluded me. So be it. My back was hurting and I headed back to the truck about an hour earlier than planned.

Earlier that morning when we arrived at the parking spot, in a silly mood for sure, I asked Charles if there really were huge trout in the little pond that adjoined our parking area. With a raised eyebrow and a smirk he said, "Sure Alan. Go have a go at 'em. Chad and I are going over here," as he pointed towards the river.

Well, after stretching out on the picnic table for a while I couldn't resist the temptation of the pond. A few weeks ago at the Virginia Fly Fishing Festival I got to know one Mr. Steve Vorkapich, the creator of the Float Master strike indicators. I had met Steve a few years earlier, but other than exchanging pleasantries when our paths crossed at various fly fishing shows, we really didn't know each other. That was my loss. Steve is without doubt one of the nicest guys I know, and spending some time with him at The Speckled Trout B&B in Waynesboro was a highlight of our trip north. Before parting ways at the festival I convinced Steve that we needed to do some product swapping. (For the uninitiated, Sunday afternoons at most fly fishing shows see frantic activity among the vendors as they wheel and deal to carry home items that they've admired all through the weekend but were to cheap to buy.) I left with Steve's strike indicator selection and he left with a few of my prints.

So here I was on a premier southern trout stream, rigging up one of Steve's indicators with plans to try them out on the little pond's bream population. I selected a small yellow one and placed it about a foot above a brown Girdle Bug. Wham! The minute the rig hit the water it disappeared, and shortly thereafter I had in my hand a pretty little bluegill. I won't try to convince you that every cast had the same result, but I will tell you that over the next hour I landed at least three dozen of the little guy's neighbors, including the nice one shown here. 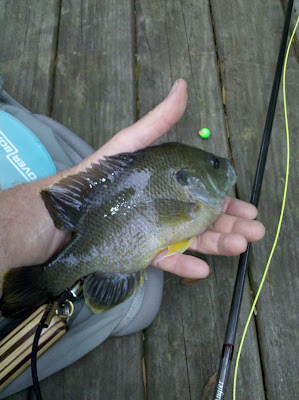 I found the Float Master easy to cast and wonderfully easy to re-position for different depths. And when I finally had enough and broke my gear down, I saw not a single kink in the line from its usage.

They say that fly fishing soothes the soul. They say that it's not just about catching fish - it's about the experience. They say that standing in a clearwater trout stream and soaking in Creation is good for you and your relationship to it's Creator. All true. Chad and I got to do all of that on Saturday. I got to do that before hiking back to the truck and the pond, but I sure am glad that I got to experience the simple pleasure of landing a mess of bluegills too.