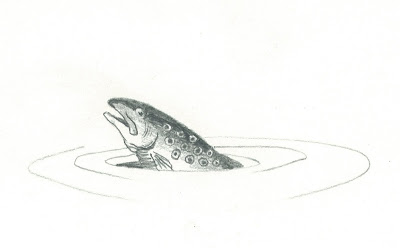 No, the Mad Mud Hopper is not a new terrestrial to try out when the bugs return come spring. And it’s not a new dance move either...though maybe it could be. My "dancing" as practiced on Saturday was at least equal to one of my long ago, wine induced attempts at real dancing.

Chad and I discovered a new pool on the Davidson this past Saturday. Its exact location will remain a secret...as if there are any secret, unknown pools on that heavily fished stream. We had the pool to ourselves, as most of the anglers were trying to tempt those pigs that hang out around the hatchery.

I hooked a beautiful brown of 15-16 inches and as I was about to net him, he darted between my legs and hung the upper fly on the backside of one of my gaiters. I was wading at mid-thigh depth and it was COLD...so cold, that with a wading jacket and long sleeve shirt on, I didn't want to reach down underwater to unhook it. Ever try to raise one leg behind you while standing in the current in very soft sand while holding a fly rod and net in one hand and pathetically reaching and trying to balance with the other? If your knees are as wobbly as mine are...don't try it. I didn't fall in, but needless to say, amidst my contortions and hopping around...the fish escaped with my Sheep Fly dropper. It’s a wonder I didn’t stomp him to death as I tried to free the fly.

Fortunately, Chad, who had wandered downstream a bit, did not witness the Dances With Trout spectacle or I would never hear the end of it. He already laughs at what I call dancing anyway. But I do wish he had been there later to see the fish surface and mock me. I swear that fish had a grin on his “face” as he rose above the surface for one last chuckle.