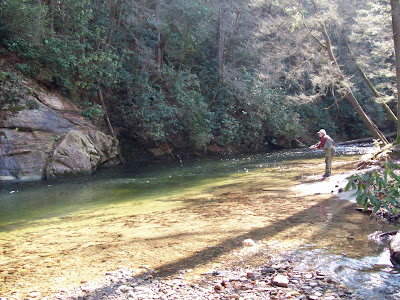 Jerry on the "D"
Jerry flew in last Friday afternoon from Arkansas for some pre-Thanksgiving fishing on the Davidson. I had checked that morning with Kevin Howell at DRO about the stream conditions and was assured that although still high from the recent floods, the water was clear and the fish were biting, so after a quick “howdy” and the unloading of his gear we headed out for the “D” to get in a couple of hours of fishing before dark.

Knowing that time was short, and wanting to get Jerry on some fish as quickly as possible, we went straight to the very upper reaches of the hatchery section, way above the bridge to begin our weekend of fishing. Sure enough, just as Kevin had said, the water was beautifully clear ...but the fish were not cooperating. In the short time we had before darkness set in we tried just about everything we could think of and only managed to catch two brookies apiece. Not that we were complaining though...the fish were feisty and beautiful. 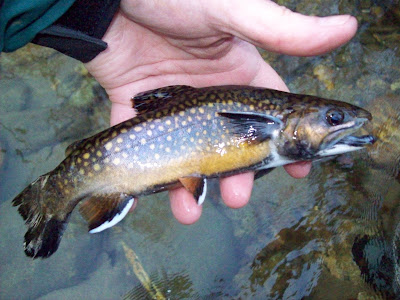 Saturday morning, fearing that the Catch & Release waters would be shoulder to shoulder, we headed downstream to the Delayed Harvest area to try out a stretch that I had never fished and once again we found the fishing to be difficult. We worked about a half mile of water with nothing to show for it but good companionship and the pleasure of fishing in some absolutely beautiful scenery. We came upon a pool that literally took my breath away with its beauty. I know you’ve seen those photos from New Zealand...the ones with the deep green crystalline water cradled by boulders strategically placed there by God just for our pleasure....well, the Kiwis have nothing on this place. On second thought maybe they do. We saw no lunker browns or rainbows in the run. Like me, Jerry (having cut his teeth in the Ozarks) finds it hard to see the fish against the dark floor of our local streams. Despite my statements to the contrary, I’m sure he doubted that they were in there. 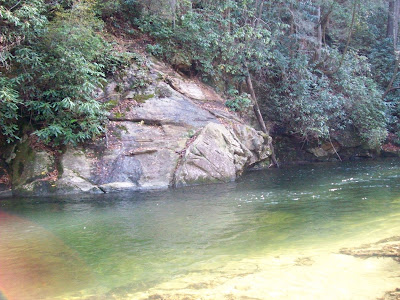 So after a lunch of peanut butter sandwiches we went back up to the hatchery section where I knew we could see the fish. From many previous visits to the deep and slow waters of that section I knew there would be plenty of plainly visible monstrous trout to get his adrenalin pumping. Was I ever in for a surprise. I didn’t recognize the river. The floods had changed its character entirely. Gone were the long slow runs with their undercut banks holding the biggest and wariest fish, replaced by a scoured out stream bed with little structure. The “structure” was now up in the trees lining the downstream banks, but on the good side...the silt and slime that had buried or partially covered the rocks underfoot had been swept clean. It was a totally different stream, and probably a change for the better. Time will tell.

At least Jerry got to see some fish there. Standing midstream, all of a sudden those fish that weren’t there suddenly appeared everywhere...rising, jumping, slashing and cavorting across the stream as they partook of the Davidson’s famous “pellet hatch”. In their normal fashion they paid him no mind as they darted around and about him, gorging themselves on their daily rations. A long handled net and the fishing would have been easy! But as it was, except for one little fish caught by Jerry on Saturday, we would have gone fishless. No matter though...it was still a fantastic day.

Normally, after Jerry and I get together for a fishing outing there is a story to tell...and there will usually be drastically differing versions of the story. I would normally begin with an elaborate description of all the fish I caught...their size, strength and beauty...and out of nothing but kindness, throw in just a word or two about Jerry’s exploits. This time though, the fishing didn’t leave me with much in the way of embellishment material, so I’ll just say what a wonderful two days it was. Jerry and I have shared many days on the streams and lakes over the years and some of those days were just as unproductive as these were. But all of them are special. To think of him as a best friend and a great fishing partner is a gross understatement. A guy never had a better friend. May we share many more days like we just had. 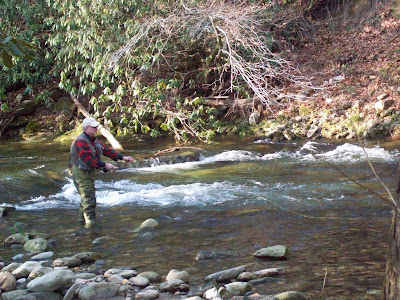