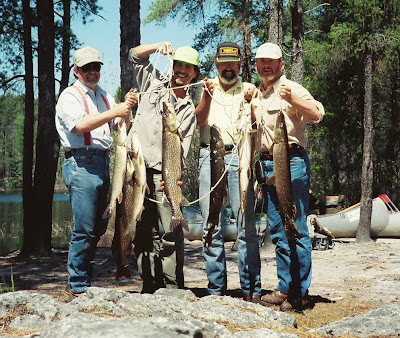 From right to left, Jerry The Mad Cheese Scientist, Richard The Ivory Snatcher, Joe The Classical Guitarist, and The Speaker of Truth.

Once upon a time in the early spring of 1989, in a place far removed from civilization, four good buddies spent an eventful week fishing the Boundary Waters of Northern Minnesota. A long awaited and well planned adventure, there was Jerry, The Mad Cheese Scientist...Richard, The Ivory Snatcher,,,Joe, The Classical Guitarist...and moi, The Speaker of Truth.

Leaving out of Ely, Minnesota we lugged our canoes and gear through countless lengthy and grueling portages. ( I say "countless" both to elicit sympathy and because I can't remember how many there actually were...more on my memory later.) Basswood Lake was the destination and Smallmouth Bass were to be the prey. The weather was ideal and our preparations were spot on. With visions of surface busting bass, two of us to a canoe, we paddled towards the Canadian border.

We had been given good advice from our outfitter...the standard stuff like keep a clean camp, hang your food from a tree, and by the way, stay away from Basswood Falls. What's that, we said? Seems we were a week behind a similar expedition that had ventured too close to the falls. These particular falls are BIG and getting too close to them in a canoe invites a harrowing white water adventure through what must be Class XXIV rapids. Get too close and its got you...you can't get away. A week earlier a canoe got too close and the authorities had given up looking for one of its occupants just the day before our arrival. OK, we'll stay away from the falls.

Our campsite was on a little spit of land dividing two parts of the lake, giving us great vistas and easy access in every direction. After a hearty freeze dried dinner, a well earned good nights sleep and your standard campfire breakfast we made plans for our first foray into the wilds of Smallmouth Heaven. So that each of us could benefit from the sterling conversation and companionship of the others, we decided that we would rotate each canoes occupants on a daily basis. I don't recall who I drew the first day, but it doesn't matter...it's another day's assignment that matters.

Well, we were too early for the Smallmouths. Another week and we would have had them. As it was though, we were right on time for the Northerns. Caught tons of them on all manner of top-water baits...but just a few Smallmouth. Every day we sought out a new cove, a new tactic and of course a new boat companion. We ventured far and wide, and yes, we even headed to the falls one sunny morning. As we cautiously approached them we could see, feel and hear the danger ahead of us. An awesome cataract tumbled down a chute of boulders and drop-offs, each ledge ending in a pool of very fishy water. It was too much to resist. We secured the canoes and with rods in hand we scurried from one pool to the other in search of fish. We caught a good many...and some nice ones too. Don't know what my companions were throwing but I was sticking to top-water baits. Remembering the matter of the drowned canoeist, the last thing I wanted to do was get hung up on the bottom...or anything that might be lurking there.

Days of paddling, casting and landing Northerns can tire a fellow out so on our next to last day, a day that I was to team up with The Mad Cheese Scientist, I suggested right after breakfast that he and I hang around camp and take it easy that morning. Jerry was all-in, so that was the plan. A couple of gentlemen fishermen, hanging around camp, taking life easy.

Like every fisherman I have ever known, we had spent the previous days fishing everywhere but at our back-door, so long about mid-morning I grabbed my spinning rod and headed for a small cove...just a short walk from camp...just to see what was there. I had one lure with me...a lure soon to be famous among the four of us as the subject of future fish stories and ridicule. Back at our home base of Carthage, Missouri there lived two brothers. Two very inventive brothers. They had bought the rights to a unique lure propeller, and using it, had come up with a lure named "The Woodchopper." Hand made of sugar pine, this top-water bait with the crazy props on both ends was deadly. This was long before they marketed it nationally, so there weren't many of them around, especially in the north woods of Minnesota. In fact, the one I had was a prototype.

The cove was amazing. Shallow and clear with a good number of downed pines stacked like Pick-Up-Sticks just under the surface. As I studied the water, a few of the logs were moving. Good grief...those are fish! Always interested in sharing my good fortune with others, I decided I must run back and tell Jerry...right after I made a cast ot two. The Woodchopper had no sooner hit the water than a "log" exploded to the surface and headed for Canada...and he took the Woodchopper with him. After regaining my composure and cursing my luck, I yelled at Jerry to come join me. But of course, after the recent commotion, by the time Jerry arrived the cove was vacant of fish.

"That fish was four feet long! You should have seen him! He was huge!"
"Yeah, sure he was Alan. Are you sure he wasn't ten feet long?"
"Jerry, I swear...he was four feet long if he was a foot."
"The foot part I can believe."
"Really, he was! And he took my Woodchopper!"
"Well you can get another one when we get home."

The next day I teamed up with Joe, who didn't believe me either, and Jerry headed out with Richard, who just laughed when hearing the story. Joe and I had an average, mostly uneventful day and headed back to camp. About an hour later Jerry and Richard returned. As I was helping to pull their canoe up the bank, Jerry started in on me.

As Jerry grabbed his stringer and held up a snaky looking Northern of about eighteen inches, Richard chimed in with, "And here's your Woodchopper to prove it! He still had it in his mouth."

Needles to say, the campfire conversation that night focused on my uncanny ability to exaggerate, as have most of our get-togethers since. Had they attempted to duplicate the campfire scene from "Blazing Saddles" there wouldn't have been more laughter and finger pointing.

It's been twenty years since the Basswood Lake Incident and how they got that Woodchopper I'll never know, because none of them will fess up. But this I do know...that fish was huge...every bit of four feet long! I know he was. I saw him. Really.

Publishing this little bit of history is my birthday present to myself. My best friend, Jerry (the former Mad Cheese Scientist) will squirm again as he reads the true story of our northern adventure; he will no doubt stick to his side of the story and nervously laugh as he, yet again, attempts disparage my honesty.
But most of all, deep down inside where the truth resides, he’ll be green with envy that he has never felt the pull of such a magnificent fish! 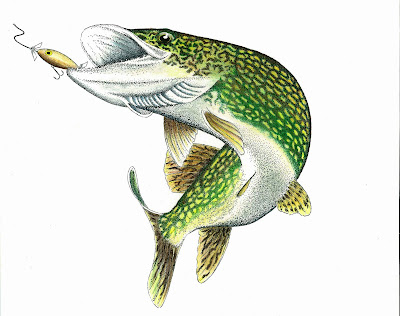