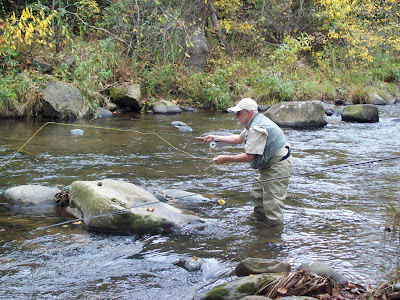 Research ???
You may have noticed that there are very few grab and grin photos on the blog. Simple explanation. I catch very few fish worthy of the effort involved in capturing them on film for posterity. As I think I’ve said before, I create a lot more big trout than I catch, and a recent day in Spruce Pine proved it. That doesn’t keep me from trying though. As I tell Shirley (as often as I think I can get away with it), “I need to get out and do some research.” After all, if I’m going to continue creating these images, from time to time I need to refresh my memory of what they are supposed to look like...even if I’m studying someone else’s fish.

Project Healing Waters put together a little fishing competition a couple of weekends ago and my buddy and PHW leader, Ryan Harman, asked me if I would be the veteran half of his team. Now, I’ve fished with Ryan a few times and have managed to catch a trout or two in his presence, but to label me as a “competitive fly fisherman” would be a major insult to those who really are. I suspect that the invite was more a kindness play than anything else.

As some of you know, I frequent the Southeastern Fly Fishing Forum occasionally as “52trout”, especially if I think I can stir things up a bit by ruffling the feathers of the fly fishing elitists. Anyway, recently there was a debate on the merits of competitive fly fishing that elicited a lot of comments putting it down. A lot of folks got indignant, if not downright insulting, and others came out with the old deal about how they never count fish and that just being there on the stream was all they needed to soothe their souls. Good for them. While I wouldn’t argue with that point of view, I can testify that a competition can be great fun if not taken too seriously, and that in the case of getting our wounded warriors on the stream it’s hard, if not impossible, to beat.

You see, we don’t hold these tourneys on your average “open to the public” trout streams. Why’s that? Well, in the case of Project Healing Waters, we want the vets to catch fish...and so what if they are just released pellet crunchers, fattened to the point of bursting? The whole point of PHW is therapy. Physical and mental therapy. That and the idea that we are introducing disabled vets to a sport that they can enjoy for the rest of their lives. And by catching a trout or two, we greatly increase the odds that they will enjoy it. Take my word for it...the therapy works.

But back to the competition. Shirley, Ryan and I arrived on Saturday afternoon to the prettiest little trout stream you have ever seen. If you’ve ever sat and dreamed of owning a little land with a trout stream flowing through it...this was your dream. In the high country of North Carolina, just “behind” Mt. Mitchell, this beautiful stretch of private water was made available to us for the weekend by the kindness of River’s Edge Outfitters in Spruce Pine, NC. Many of the beats afforded easy access for some of our “not so mobile vets” and each beat was packed with fish.

Saturday night was a special treat. Tim Cummings,our organizer and host, and his team hosted a great meal and auction for all of the vets and their families, along with the professional guides and other volunteers. We had a great presentation by Curtis Fleming of Fly Rod Chronicles with a fabulous slide presentation that was miraculously put together from photos taken during the day Saturday, and I had the honor of presenting a special PHW print to each of the thirty-some vets in attendance. Talk about inspirational. The guys and gals were really appreciative, but nothing compared to the appreciation we had for them and their service to the country.

Sunday morning Ryan and I hit the water with high hopes of successfully tempting some of the brutes that were put there for our pleasure. Didn’t take Ryan long to score...and score again. The fish were deep and taking nymphs so lightly you’d have thought there were sharp hooks attached...or something. Nymph fishing aint my thing. Try as he might, Ryan has a hard time teaching this old dog new tricks, so stubborn as I am, I continued flogging the water with my standard stuff...and going not just fishless, but strikeless. I recall my first exposure to nymphing. About forty-five years ago an old gentleman at Roaring River State Park back in Missouri explained it to me as if it was some sort of mystical endeavor. One that required a special “sense” in order to detect the take. Of course in those days there were no strike indicators so one had to just feel the strike down deep in their soul. I tried it and tried it and no matter how mystical I tried to get, all I sensed was...well, I sensed nothing at all...especially the tug of a trout.

Our afternoon beat was a tough one. In the morning session our opponents went fishless there, and except for one trout caught by Ryan, we would have too. So Ryan ended the day with four, including a very nice twenty incher which was in a three way tie for the largest of the day. And I...well I was skunked...proving yet again why this blog will never be a how-to manual. As much as I love to fly fish, it is not my religion. I fly fish because I was raised to and because I enjoy it immensely. And truth be told, I’m not as good at it as you probably are...nor will I ever be. I don’t study it. I am pretty good at identifying the variety of fish I catch, but I would be hard pressed to identify the most basic bug found on the stream. Ninety-nine percent of the time I couldn't care less about matching a hatch. Don’t get me wrong...if spinners are falling like rain and the trout are piggin’ out on them, I’ll of course join in the fun, but on a typical day I won’t be wracking my brain trying to match a size 22 midge pattern to that gnat that keeps buzzing around my nose. And the last time I actually looked on the underside of a rock I was searching for my line nippers after a Zinger failed me.

Needless to say, with my lack of skill, we didn’t win the thing. No trophies, no plaques, no photos or prizes. I think Ryan still likes me, but I think he’ll look elsewhere for his next competition partner. Did I say there were no prizes? Shame on me. Every single vet there had a great time. Most of them caught a few fish and the smiles on their faces were prize enough.
Posted by PATRIOT DREAMS at 8:10 PM