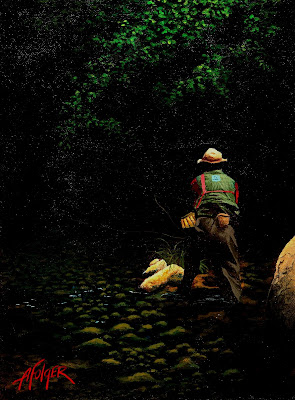 It could have been a trout - more likely, the fading light playing tricks through the leaves. Evenings like this mess with the mind.

I was awake before the alarm went off. A normal occurrence these days. Used to be that I would lie awake on the “nights before” imagining the fish I would catch. Half afraid that I’d miss the alarm and oversleep, I’d play fish after fish until nothingness overtook me, then with the alarm sounding I’d rise from bed in a manner unknown on days that promised nothing but work. Now, in my sixties, sleep still comes slowly. But for different and unexciting reasons. Yes, I’ll play a few trout before it comes, but only to pass the time until it does. I miss those nights of eight hours like I miss so many other things that age brings our way.

I know this place well and my father knew it well before me. He was raised within an hour of the place and he had the good sense never to move far from it. I wasn’t so lucky. Careers can be cruel like that. Tonight I’m back, and as I approach the pool I’m swept away with memories. Dad used to say that there was a big brown back under the trees at the far bank. He said he would never see him during the day, but in the twilight, occasionally, if the river was really still, he might see his nose appear from the rock, waiting for the darkness that big browns are fond of. He said if I can get the drift just right I might catch him one day.

It’s getting darker.
Posted by PATRIOT DREAMS at 9:16 AM