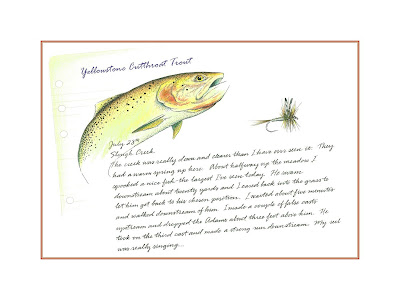 The wording above came verbatim from my fishing journal dated July 28,1962 - forty nine years ago. It reads, "The creek was really down and clearer than I have ever seen it. They had a warm spring up here. About halfway up the meadow I spooked a nice fish - the largest I've seen today. He swam downstream about twenty yards and I eased back into the grass to let him get back to his chosen position. I waited about five minutes and walked downstream of him. I made a couple of false casts upstream and dropped the Adams about three feet above him. He took on the third cast and made a strong run downstream. My reel was really singing..."

We spent many days, over many years, fishing the upper meadows of Slough Creek and many nights since, in that hazy period just before nodding off, I've replayed this episode and many more like it.

I'm told that the creek is pretty much the same today as yesterday, with the exception of the traffic it gets. Our days of fishing the upper meadows were rarely interupted by the presence of other anglers.

The journal entry continues:
...I had to follow him downstream, not because of lack of line, but there was a steep bank where I hooked him and I had to find a place to land him. He fought me for about 5 minutes and I landed him on a mud bank. The fish was bigger than I thought. It measured 16 1/2 inches and weighed 3 1/4 pounds. It was the largest fish of the day. The rest of the family fished the Lamar down from the ranger station and brought home 7 fish.

Later that same year, on this same stream, I had one of those hair-on-the-back-of-the-neck experiences...As soon as the car was parked at the campground I headed up the trail to the 1st Meadow. Back at our base in Cooke City we had heard many stories about the bears so as usual, I was a little nervous. We had heard that the area had more grizzlies than anyplace else in the lower 48.

A few days before, on an outing to West Yellowstone, we had seen "The Grizz" at relatively close range. Pulling up to the edge of the city dump just before sundown there were at least twenty black bears of all sizes rooting through the garbage when all of a suddon - in unison - they all stood on their hind legs and looked off in the same direction. Sniffing the air, again in unison, they hightailed it out of there. Up the hill came "Ole Slewfoot", made famous by the Craighead brothers, and none of the black bears wanted anything to do with that swaggering monster or the other grizzlies that followed along. As we watched from the safety of the car we gained a new level of respect for the power and grace of those animals.

The trail from the campground was easy to follow. We were told that it ended at a place named Silvertip Ranch. Wary of the bears, I made as much noise as I could, whistling and singing the pop hits of the day. I saw bear sign a time or two but never saw the perpetrators. One of the rangers back in Cooke had made matters worse by telling us about the buffalos. He said they were far more dangerous and totally unpredictable. I was on guard for sure.

At one point along the canyon the trail came pretty close to the stream...close enough that I could hear the water. Not one to pass up a trout or two, I had to give it a try. I left the trail and headed through the pines to the stream. Getting closer, it was clear that the water was beloew the level that I was on, so as I neared the water I dropped to a crawl to avoid spooking any trout that might be waiting. As I neared the bank I could see the far side of a very nice pool below the drop-off. Excitement was in the air as I inched toward the edge and just as I peered over...moose antlers were in the air also. And right in front of my face.

Over the years as Slough Creek crashed through the canyon it had cut into the near bank and deposited a nice bed of sand at the stream's edge. Just nice enough and big enough to be the perfect mid-morning napping place for a bull Shiras Moose. As the big guy heard me and swung his massive antlers around I'm sure he was wondering who was this that had the audacity to disrupt his nap. As I backed away he came slowly to his feet and waded across the pool to the far side. I sat there for a good long while before I tried the fishing. The ranger had said nothing about a moose.