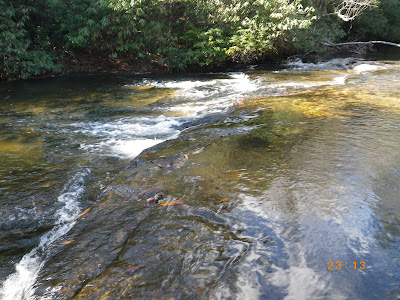 I got a call from Ryan asking if I could help out on Thursday. He had arranged to take some vets up to the West Fork of the French Broad for a day of fishing and as the plans were finalized he realized that he was short handed in the “guide” category. Told him I’d have to get back with him on that one.
Thursdays are work days around here, and business being slow as it is, taking off for a day of fishing is frowned upon. I pondered Tim’s reaction to my pending request. Ryan knows that a weekend outing will find me there with bells on, but a workday...its iffy.
Tim said OK, but he made it clear that he wasn’t doing it for me or Ryan...he was doing it for the vets. “Thanks Tim, I owe you one.”
After loading the car and scraping the windshield to remove a thin layer of frost I headed out on the ten minute drive to Davidson River Outfitters – our rendezvous point for the days activities. I was early of course and spent the time rummaging through their fly inventory as if I might actually buy something. The clerk was new to me and was unaware that a purchase was highly unlikely. I inspected their selection of fly boxes; I perused their waders and used their bathroom. I was getting antsy.
Finally I thought I’d better go back out to the car and get my gear ready. As I had already decided that I’d be using my 2 wt., I grabbed it from its bag and went to my vest to get the reel. No reel. Damn, where is it!
Then I remembered that I’d put it in my wader bag after the last outing. But where was the wader bag?
I had brought an extra rod and reel (my 5 wt.) just in case we needed it for one of the vets, so that would have taken care of the reel problem, but the REAL problem was that I had to have the waders. Back to the house.
Twenty minutes later I was back at the shop just in time to greet the vets. There was Nancy and Harry...both in wheel chairs...and Jamie, the absolute best crutches wielding, rock hopper you’ve ever seen. Off to the creek we went.
The water was down a few feet but as pretty as ever. The guy at the shop had told me that it hadn’t been fished for at least a week, and I later learned that he had told Ryan that it wasn’t fishing well at all. Huh? Wasn’t fishing well a week ago? Any creek, lake, river or pond that I’ve experienced can have good days and bad. Heck, they usually have good hours and bad, so I wasn’t worried at all. What happened a week ago was of no concern. At least we wouldn’t hear, “You should have been here last week!” Today was gonna be gang busters...I just knew it. 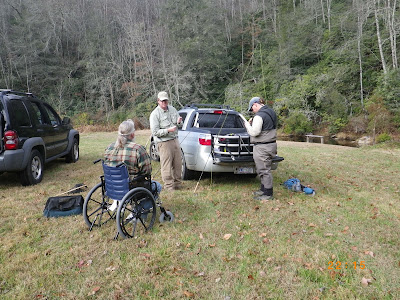 We rigged Harry and Nancy up with a couple of ten foot Project Healing Waters TFO’s. Those ten footers are a great help to beginning fly casters, especially if they are wheel chair bound, and they began slinging weighted nymphs into the pool right at the end of the meadow. Then Ryan insisted that I walk downstream to see if there were any other spots that were accessible for the chairs. I took my rod with me of course.
The West Fork is a small stream even when running normal, so I was quite pleased with my decision to go with the two weight, and fishing downstream is right up my alley. Tying on a marabou, I gingerly entered the stream being careful to make no waves. I saw a few 10 to 15 inch rainbows working and cast well ahead and upstream of them, hoping that on the swing they’d find the marabou right at eye level. They did. They ignored it. A few casts later one of them looked its direction, but that’s all. I tied on a small midge dropper and headed on downstream. Two casts later I lost the entire rig in a tree. Was it gonna be one of those days? Naw, keep fishing Alan, and when in doubt go to the old standbys. I tied on a bright yellow woolly.
I spit on it, I dunked it, I cussed it...and it wouldn’t sink. What the heck, I didn’t want to spend any more time tying on another fly, so in frustration I cast it out and down and what do you know, the second it hit the water a fish slammed it...or so I thought. I felt nothing as I lifted the rod. A couple of casts later...the same thing...big splash...lift rod...nothing. So they liked it. But why weren’t they taking it? I tied on a dropper, hoping that as the bright yellow, high floating attractant got their attention, maybe they would inhale the dropper.
Sneaking into the head of the next pool I tested my theory. The third cast brought the same reaction that I’d seen in the last pool, but this time I felt the weight of a nice fish. A few minutes later he was in the net. He had hit the wooly. I snapped his portrait and decided that I’d better get back to Ryan and report on the lack of wheelchair access that I’d found. 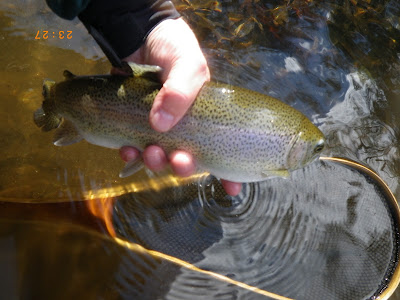 “How’d you guys do?” I asked. Ryan reported that Harry had caught a good one and that Nancy had blanked.
I told him that they were hitting on top downstream, and true to form, Ryan said that they were hitting emergers. You see, Ryan is one of those guys that looks at fly fishing a little differently than me. He can name any bug, tie up an exact replica and catch more trout with it than I ever will. He’s a scientist on the stream. I’m just a fisherman.
“Emergers, hey? Well I’d hate to see what these guys emerge into,” I said as I showed him the bright yellow fluffy thing that they were hitting. Ryan just shook his head in disgust. “I should have known,” he said.
I’ll never out fish the man; after all he has the trophies and reputation to back up his theories, but I like to do it my way. I firmly believe that confidence is just about as important as having an honorary degree in entomology and my confidence (and 50 years of experience with this particular fly) usually gets me a fish or two.
As the day progressed everyone but Nancy managed a few more fish. This was only fitting, because on the last two outings Nancy had out fished everyone...both in numbers and in size. Everyone is entitled to an off day. She did however manage to land a nice rock. How she was able to hook and bring to net that nearly round and featureless chunk is unknown. But it made her day! Such is the way of fishing with our wounded warriors. It’s not the fish (but they do help), it’s just getting out there with your fellows and enjoying the quite...the solitude...the beauty. It soothes.
I beat Shirley home. As I was relaxing on the couch the phone rang. “Open the garage door and help me get these groceries in.” As I was opening the tailgate to secure the vittles she asked, “Did you catch any fish?”
“Sure did.” I replied.
“Did they get cold?”
“Not at all, those fish are used to the cold water.”
“I meant the vets! Shut up and get those bags into the house, smart ass. You’re going to work tomorrow!”
Reality sucks.
Posted by PATRIOT DREAMS at 10:36 PM