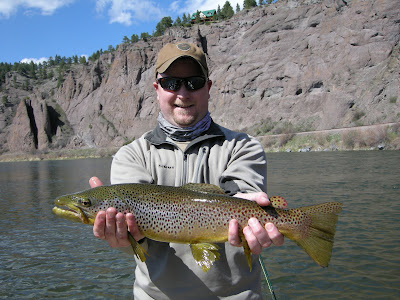 52 days ago we announced that we were going to have a contest for free Catch & Release artwork and today the winning name was drawn. My thanks to everyone that entered...each of you surely had a catch worthy of framing and perhaps you’ll consider getting that done at some future date.
In the meantime though, Chris Harris, who has obviously spent some quality time on the Missouri River casting to big browns, is well on his way to having a special memento of a recent trip. Yep, Chris won the drawing and now I have to get to work. While Chris clears some space on his office wall to show off his catch, I’ll be doing my best to do it justice.

Home Again...
Shirley and I were really glad to return home form a nice weekend at the South Holston Fly Fishing Fest last night. Really glad to get back to air-conditioning, that is. You would think that being situated a stones throw from one of the colder tail water streams in the east would cool things down a bit, but no, it was HOT!

In spite of the heat, we survived...thanks in part to the ever present volunteers that Knox Campbell had recuited to hand out those ice cold bottles of water throughout the weekend. As we expected, Knox put together another great show for vendors, presenters and the fly fishing public. Seeing a hundred eager “students” standing in the sun alongside the casting pool to soak up the wisdom of Joe Humphries and Lefty Kreh with no fear of sunstroke proved that Knox’s efforts were not wasted.

We met some old friends from last years show and of course some new ones as well. We managed to sell a piece or two and got to spend some quality time with fellow artists, Bruce Bunch and Paul Thompson when the action slowed. Come to think of it, swapping stories, critiques, advice and techniques with them makes any show a success. ‘Course it always helps to make enough in sales to pay for the gas home!

Posted by PATRIOT DREAMS at 2:15 PM