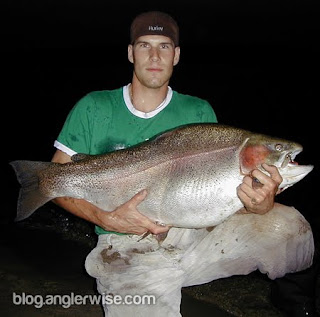 In the future all trout will be large. There will be no need for huge fly assortments or landing nets because the trout of the future will be a genetically engineered conglomeration of traits that the majority of anglers desire. Their growth rate will closely resemble that of your average 6 year old fed a strict diet of Mountain Dew and Twinkies. Tippets will be out of style as the trout will be bred to ignore line sizes, and virtually any fly that comes close to resembling anything natural will be readily taken.


Upon hook-up, these trout will be programmed to fight extremely hard, but only for a few minutes (determined by their weight), at which time they will willingly come to hand without complaint. They will still secrete a mucoprotein protective coating of slime, but the essential electrolytes necessary for osmoregulation will not escape the reengineered slime layer, meaning that prolonged handling for those grip and grin moments will not be a problem.

The days of catching small trout will be gone...especially native trout, as they will be totally unsuited to compete with their triploid cousins. Stream reading will be greatly simplified as all trout will be programmed to inhabit areas free of snags and there will be a pecking order established as the trout line up in their specified feeding lanes.

Where am I coming up with this falderal, you say? How about a 48 pound brown trout and a 43 pound rainbow that were caught in the past year. Neither of these disgustingly fat creatures had to endure the rigors of growing up in a stream. Nope, they grew up in Dr. Frankenstein’s Hatchery.

These two genetically engineered Frankentrout shattered the old world records, and at the same time shattered my opinion of the International Game Fish Association. Just like in other sports, the world of angling has been invaded by genetic engineering and doping. Anything to achieve bigger. Anything to break a record. Anything goes as gene science and chemistry rule the day. The end product of this tinkering produces huge trout...funny looking things with huge bodies and tiny mouths. The girth on the new record Rainbow matched my own...34 inches. They’re created with three sets of chromosomes making them sterile and putting all the energy they normally expend in reproduction into body mass growth.

One can only hope that some fool doesn’t apply the same technology to the trout’s toothier cousins. Imagine the teeth of a two hundred pound Northern or Musky. Or worse yet...ten ton great whites.