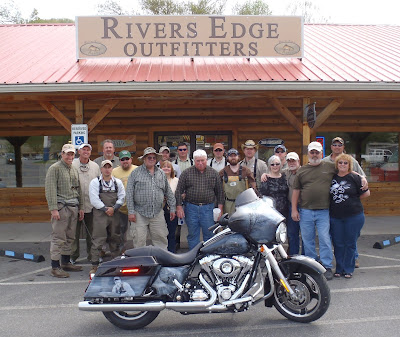 WOW...What a weekend! On Sunday I participated in the Grand Opening of Projects Healing Waters’ Cherokee Chapter in Cherokee North Carolina and what a good time I had! Shirley and I arrived on Saturday night and had a great dinner hosted by our organizations founder, Capt. Ed Nicholson. Along with Curtis Fleming of Fly Rod Chronicles, Billy Davis and his wife Brenda and our Mid-South PHW Coordinator and best buddy John Bass, we enjoyed a marvelous meal and made plans for the next day’s festivities and fishing.

Our folks at Rivers Edge Outfitters will be providing meeting space for the Chapter’s activities and their shop, sitting right on the banks of the river, was the ideal location to kick things off. A number of our visiting vets, including our intrepid leader, Capt. Nicholson, enjoyed the fishing right behind the shop, catching fish after fish on a variety of patterns as we watched from the deck, chowing down on delicious grilled burgers and brats.

Long about mid afternoon I was summoned back to the deck, where I found Curtis and John set up in front of Steve Hasty’s camera for what was obviously a shoot planned for an upcoming show. Of course I was aware that there was going to be some filming done and that I was going to be a part of it, but I had no idea what these guys had planned right now.

Curtis began by introducing both John I, and then John started recounting our time on Big Cedar two weeks ago. Then he made some disparaging comments about the ancient tackle that I was using...wondering how I managed to catch anything at all on such antiquated equipment, and then Curtis pulls out two brand new TFO rod cases and presents them to me as a thanks for the work I do with the organization. I was speechless of course. Inside each case was a Project Healing Waters Series TFO rod and reel, complete with line and leader. The first one held a nine foot five weight and the second a nine foot eight weight. Of course I stammered and stuttered my way through an insufficient thank you and hurried away before they had a chance to take the rods back. Those that know me well know that being a tightwad, I’ve been heard to say “I aint one to give up on a fly rod just because it’s got a little wear on it” (paraphrasing Augustus in Lonesome Dove), so these two new rods ought to last me at least two more lifetimes.

Monday morning the film crew, the vets and volunteers headed for the river. Curtis and I, along with River’s Edge head guide, Eugene Shuler, picked out a likely looking stretch. With cameras rolling, Curtis issued a challenge regarding the number of fish caught and the fun began. Knowing my role well, I graciously allowed Curtis to catch the first fish, and when just a few casts later he landed a very large one, I was determined to hook and land only the small ones. After all, I want to go on the show again someday.

Although we quit counting after the first five or six, within the next couple of hours we each caught at least 40 very nice trout. I learned some very good techniques from Eugene and best of all, Curtis and I each managed to do the Cherokee Grand Slam...catching rainbows, browns and brookies. From what I heard when we gathered back at the fly shop everyone else did equally well. Smiles were everywhere.

By the way...Did you ever make a special effort to take your camera along to photograph all the fish you would catch on a special day at a special place...and then catch nothing worth recording? Well, here’s a tip: If you want to catch a load of fish, just leave the camera at home!
Posted by PATRIOT DREAMS at 7:11 PM