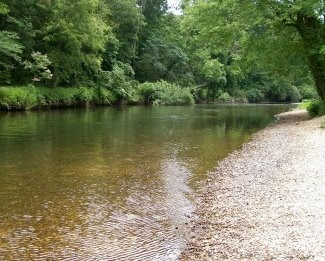 Got an email from River Geezer that got me to thinkin...why am I drawn to the clearwater of mountain streams?

I can start by blaming it on mom and dad. As I’ve mentioned before, my very first memories are of creek banks. Seeing old black and white photos of me in a stroller of sorts, parked on a gravel bar, with dad in the background casting a fly, I have to believe that my addiction was pre-ordained. But it wasn’t just trout streams back then. It was anywhere with clear water and a fish or two. Dad used to carry one of those canvas creels and on the bass streams, on days when the fly rod was given up for spinning gear, he’d have one of those small minnow buckets slung over the other shoulder chock full of catfish minnows. There were a lot of days like that.

Catfish Minnows. We used to call them that before the Christmas in 1965 when I got what is still one of my prized possessions, A.J. McClane's Fishing Encyclopedia. I never could figure out why we never managed to catch, or even see, a full grown version of these little black catfish, but as always A.J. had the answer. We were catching full grown versions. They were Mad Toms.

Every night after the sun went down and the sky was at its darkest we’d seine the rapids for them. The technique was pretty simple. With one of my brothers on one end of the seine and me on the other, we would position ourselves just downstream of dad. With a stout tree branch in hand and facing us, dad would walk quickly backwards (upstream) while doing all he could to upset the gravel with the stick. My brother and I would follow right behind him, making sure to catch everything that he had stirred up. Each pass would only be for ten feet or so, and if we were lucky, in addition to twenty pounds of flint we’d have a minnow or two for our effort. The seine would be laid out on the gravel bar and with the light of the Coleman Lantern we’d investigate our haul. While catfish minnows were the ultimate prize, we’d usually get a hellgrammite or two, a few sculpins and miscellaneous other minnows and bugs. I was never into hellgrammites, and I still can’t imagine putting a cricket on a hook. Those things are bugs!

As long as the catfish minnow was alive, there wasn’t a bass in the creek that could resist it. Hooked through the lips, we’d cast the minnow across and downstream, with just enough weight to slow the swing. The minnows knew what they were in for and would do all they could to burrow under the rocks to escape the bass, and as the water was gin clear it was easy to see the bass rooting them out. One minnow...one cast...one bass. And if lucky, the minnow would survive for another go around. Beautiful little creek bass. We called them “Brownies.”

There were always rumors that the creek held brown trout, and perhaps it did somewhere...maybe over towards Arkansas in its headwaters. We just figured that the locals didn't know a trout from a bass.

Ive got to get back to Spavinaw Creek. I'll take a seine with me...or maybe not. Maybe I'll just give the old black muddler a whirl. Either way, it'll be a walk down memory lane. I'll rise early at dawn and wade into the stream of my childhood. I'll splash the clear cool water in my face just like I did some fifty years ago. I'll wade upstream from Beatty Creek, casting toward the eastern bank. I'll kick up a few rocks and hope to see one of my old black friends. And if the big pool is still intact at the bend, I'll sit and replay a few scenes form the past. There'll be pretty girl diving in and hungry bass beneath her.
Posted by PATRIOT DREAMS at 5:29 PM