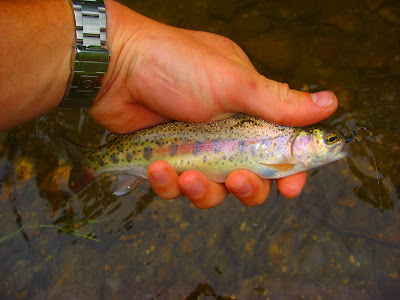 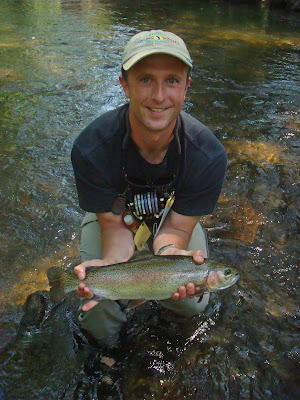 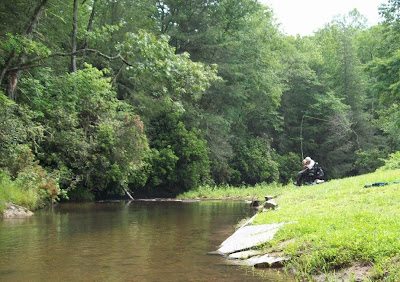 John Bass, “The Man” for Project Healing Waters in the Mid-South Region came to town with a couple of vets...Billy Davis from the Vietnam era and Ceamus McDermott, a guy leaving soon for his umpteenth tour in Iraq/Afghanistan.

On Saturday Ryan Harman from the NC Fly-Fishing Team guided Ceamus on the Davidson, while Jesse Connor, of bamboo rod building fame (Trout Dancer) escorted Billy. They spent the day on some of Davidson River Outfitters prime waters, and each of them got to meet a good number of Kevin Howell’s big rainbows and browns. John and I had the pleasure of observing. Healing Waters, indeed. To watch these guys fishing and to see the smiles on their faces as they erased some of the past and prepared for the future was fantastic. To see the joy that our sport brings them, as you consider what they’ve been through, it makes a fellow proud to be in their company.

On Sunday John Bass and I were given access to some excellent water on the West Fork of the French Broad. Deep in the woods, in “Deliverance” country, we listened hard but never heard any banjo playing...just the music of the stream. I must tell you a little about John. Many years ago, in a diving accident John Bass broke his neck and is paralyzed from the waist down. And if that isn’t bad enough, he has very limited use of his arms and hands. But John Bass is a trout fisherman, and nothing can keep him from the stream. John is the perfect person to be heading up the Project Healing Waters campaign in our region because if he can fly-fish, anyone can.

John caught at least a dozen par marked rainbows on a fly that’s very special to him...the Sheep Fly. It’s a long story that’s best told by John himself, but let me say...that was one happy trout fisherman. And there couldn’t have been a better setting. A clear mountain stream with easy access for a guy in a wheelchair...willing trout and a guy that knew how to catch ‘em. Worries? What worries? John and his Sheep Fly ruled the day. Drifting the fly deep through a nice pool he caught fish after fish including a couple of very nice ones. His skill with a fly rod must be seen to be believed. After John left for home I had the same pool to myself and by following his technique I managed to get lucky with a weighted black and yellow marabou. I think that I matched John’s total and also caught the twin of his largest one. What a peaceful setting...what a day.

Did I mention the outhouse? Conveniently positioned next to the picnic shelter, it had an ancient look to it...weathered wood like any “privy” found on any country farm. But the inside was totally modern with a porcelain commode, running water and a mirror!

Thanks again to Kevin Howell for putting our vets on some VERY GOOD water! Without guys like Kevin our regional program would be nowhere, and too many of our wounded vets would miss out on the healing therapy that fly-fishing provides. And thanks also...for the outhouse!

PS...
Update on the Tenkara.
For a few minutes on Saturday John and I snuck away to the hatchery section of the Davidson. He wanted to see the Tenkara in action just as much as I wanted to try it out on some different water. Needless to say the river was crowded, but I managed to sneak into a stretch of rapids to give it a try. (Can’t you just hear the fathers: “But honey, it’s Father’s Day. I’ll only be gone a little while...please?)

With the crowd above and below me, I was limited to only fifty or so feet of water. With John peering through the trees I quickly tied a “knot” that proved to be just a “loop” around the fly – not a knot. Standing mid stream I tossed a dry upstream and promptly lost the fly on the fist strike. A few minutes later I hooked up with a nice rainbow and was able to get him in quite easily. I’m still having trouble with the rods length though. At 12 feet it is 6 feet longer than my standard rod so I was continually hitting the overhead branches on my back cast. Yes, I’m a slow learner with a very poor memory. And with over 24 feet of line – that can’t be reeled in – it was difficult to cast to the closer pockets. I tried “choking up” on the rod, but that was pretty awkward. Maybe I could have collapsed a few of the lower rod sections. Still, it was fun and even with its limitations, it is practical for small stream fishing.

Ryan also had a chance to try the rod over the weekend and sees its potential for small streams. He suggested and I concur, that the furled leader tends to twist quite a lot and that a straight heavy leader might work a lot better. I’ll have to give that a try.
Posted by PATRIOT DREAMS at 12:33 PM