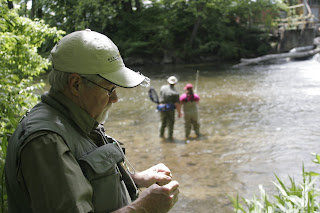 Yesterday afternoon I met Ryan Harman and a “student” from the Asheville VA Hospital for an afternoon of fishing the Davidson River. Ryan is the area coordinator for Project Healing Waters and Thursday was the day that we would put some of his teachings to use on the water. Ryan has been diligently working with the local Wounded Warriors...teaching them the basics of fly fishing and fly tying in monthly sessions held over at the local hospital. Kevin Howell, of Davidson River Outfitters had reserved one of his favorite private water beats for us, and we did our best to take full advantage of his generosity.

Normally I’m somewhat of a loner when out on a trout stream. Not that I’m unsociable, but I usually like to cover a lot more water than my companions...so I’m always headed downstream looking for that perfect run. Not so on Thursday. Without crowding him, I wanted to stay as close to Ryan Harman as I could. Ryan is on the NC Fly-Fishing team and is an avid competitor on the trout fishing circuit, so by observation or direct teaching, I wanted to soak up all the knowledge that I could.

After watching him coach his student from the VA to a couple of nice Rainbows (she had to leave early), Ryan and I had the beat to ourselves. He knew the water intimately and was very generous in pointing out the likely holding areas. We leap-frogged each other through a few runs...each of us managing to land a few nice fish. I was having good luck with my standby black and yellow marabou and Ryan was tearin’ them up with an assortment of dries and droppers. And yes Jerry, I managed to catch one on your infamous “Nub Worm.”
The fish were averaging around 16 inches...until I managed to tie into a monster. A big Rainbow of at least 24 inches took the marabou and headed straight to the gnarly roots of a downed hemlock on the far bank. As would be expected this big boy knew the stream even better than Ryan. Having been warned that Kevin would have me tarred and feathered if I showed up on his river with my 2 weight, I was using a 9 foot 6 weight. And since the trout were not at all leader shy, I was using 4x tippet. Believe me, I pushed the rod and tippet to their max and was able to pull the fish out of the snag. The fish jumped and headed downstream, and like an idiot full of misplaced confidence I was sure that I could turn him. After all...I’d muscled him out of the snag hadn’t I? Well it turned out that the tippet was stronger than his mouth and the fly came out. Opps! Slack line. I blew it.

Later, as we were getting out of our waders and replaying the afternoons events, Ryan said that he had watched the whole thing and was screaming (to himself) “Cut him off! Run out into the water and head him back upstream!” Well I must admit that that had never occurred to me. Ryan went on to explain that when competition fishing and you have to land that big one, you’ll do whatever it takes to direct the fish to where you want him...and “getting in his way” can be very effective. So, in addition to many other lessons learned yesterday afternoon, this one is REALLY carved in stone. Thanks Ryan. I’m already looking forward to my next class!

(Here is a link to a news story on our trip to the Davidson. My thanks to the Transylvania Times and Robbie Robertson for the good coverage of Project Healing Waters. www.transylvaniatimes.com )
Posted by PATRIOT DREAMS at 11:37 AM