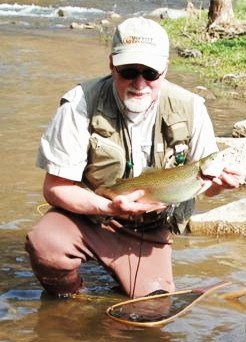 Who needs Montana when fishing of this caliber is so close to home?
I was lucky enough to spend yesterday on Big Cedar Creek just outside of Lebanon, Virginia. This fantastic members only private water is one of four streams owned and managed by the Riverbound organization. Extrememly large and amazingly strong rainbows, averaging 3-4 pounds with a good number of hogs up in the 15 pound range. I ended the day with 7 of the size pictured...and with a special memory of one of the aforementioned brutes that broke my 3x on his first run. Had an absolute ball with my TFO 6 foot 2 weight, and I will be going back for round 2 with the one that got away. 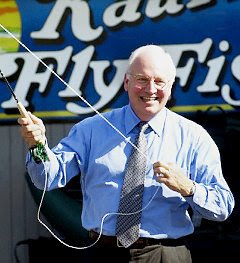 At the risk of alienating the liberal wing of the fly fishing community allow me to comment on the brouhaha regarding Dick Cheney's invitation to speak at the American Museum of Fly Fishing.

Ted Williams (no, unfortunately not that one) an editor at Fly Rod & Reel magazine stated, "The entire fly fishing community is appalled and disgusted" with the Cheney invitation. Really? I don't think so. If the invite had gone out to that peanut farming crackpot and failure from Georgia I suppose there would have been high praise and hosannas!

(A couple of years ago I had the great pleasure of spending a few days on Pennslyvania's Spruce Creek. I stayed at Harpster's Farm, which many of you know to be one of the peanut farmer's favorite destinations. I was offered the Jimmy Carter room...which of course, I respectfully declined.)

I would also respectfully decline a bird hunting invitation from Mr. Cheney, but I would love to spend a day on the stream with him. And of course he has a standing invitation to speak whenever he wants at the Folger Museum of Angling Art. I could use his coaching on the proper greeting to use if I happen to meet a member of the US Senate.
Posted by PATRIOT DREAMS at 9:42 PM